Book Review: The Affair of the Porcelain Dog by Jess Faraday 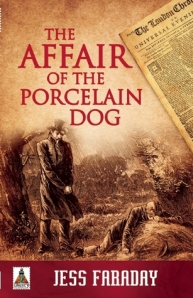 For Ira Adler, former rent-boy and present plaything of crime lord Cain Goddard, stealing back the statue from Goddard’s blackmailer should have been a doddle. But inside the statue is evidence that could put Goddard away for a long time under the sodomy laws, and everyone’s after it, including Ira’s bitter ex, Dr. Timothy Lazarus. No sooner does Ira have the porcelain dog in his hot little hands, than he loses it to a nimble-fingered prostitute.

As Ira’s search for the dog drags him back to the mean East End streets where he grew up, he discovers secrets about his own past, and about Goddard’s present business dealings, which make him question everything he thought he knew. An old friend turns up dead, and an old enemy proves himself a friend. Goddard is pressing Ira for a commitment, but every new discovery casts doubt on whether Ira can, in good conscience, remain with him.

In the end, Ira must choose between his hard-won life of luxury and standing against a grievous wrong.

There are NO words to portray how truly amazing this book is!  Dammit, but I have to try.  Here goes…

Its London, summer of 1889.  Ira Adler has spent the last two years playing live-in-lover to the wealthy crime lord Cain Goddard.  After two years of warm baths, luxurious clothes and Egyptian tobacco, Ira has no plans of going back to his former life of selling his ass in order to survive.  But Goddard is being blackmailed…blackmailed with something that will send him to prison and Ira back to the streets.  Ira must recover the ugly, porcelain dog that can expose Goddard’s secret and take all the luxuries Ira has become accustomed to…if the pesky itch that has inflamed his bollocks doesn’t ruin him first.  From the posh digs on York Street to the dirty, back alleys and brothels of Whitechapel, The Affair of the Porcelain Dog is a dark, non-stop read of mystery and murder and lies, where the next twist is waiting to be revealed as soon as you turn the next page.

The Setting: I love novels set during the time of Jack the Ripper: the grime and the grit and the soot.  They are usually so dark and never hesitate to delve deep into the underbelly of London society.  This book perfectly captures that period.  A perfect place for blackmail and drugs and crimes against humanity.  All perfect elements to spin a suspenseful mystery…

The Mystery:  I’m not going to go into any details, don’t want to spoiler. But this had the perfect balance of intrigue and manipulation where there are bad guys and good guys and bad guys wanting to be good guys.  The end game was a complicated web of ‘who did what’ and ‘who can be trusted’.  Yes, it got really confusing a few times, but Ira was right there to lay out all the pieces he had collected up to that point and explain the conclusions he had made.

The Voice: Ira Adler, oh how I adore him.  The story is told in first person from his POV.  He immediately drew me in and I felt like I was right there in the story with him…taking this journey with him.  I felt everything he felt, I saw everything he saw, I smelled everything he smelled.  He’s dimensional in every dimension that exists.  The rent-boy turned kept-man…that is confronted with the ultimate choice of living the easy life or living with his conscious.  Will he choose the man he thinks he loves or his own independence?

The Romance: Okay, this really isn’t a romance at all, but there is a wonderful underlying love story with all the bittersweet tastes of self corruption and self destruction.  I’m not going to reveal if there is HEA or HFN ending…that’s not what this story is really about.  Also, there is NO on page sex here, so don’t connect ‘former rent-boy’ with ‘kinky twinkie sex’.  Honestly, throwing in a sex scene here or there would have seriously crippled the pace and direction of this book.

The End Product: Flawless.  Thats what this book is.  If there were flaws, I certainly didn’t notice; I was too wrapped up in devouring every word Ira gave me.

Thank the gods there is a sequel, Turnbull House, which I will be starting as soon as I hit ‘publish’ on this review.

Overall Impression: It Was Amazing!

5 thoughts on “Book Review: The Affair of the Porcelain Dog by Jess Faraday”