Book Review: Defined by Deceit by A.E. Via 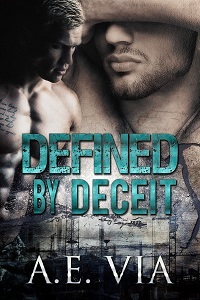 Blurb:  Life isn’t always fair, and that’s something that Llewellyn Gardner knows about first hand. His life was on the fast track until one night of extreme passion changed everything. Now eight years later, he’s still living with the aftershocks of that night. Everywhere he turns or runs, there’s another reminder. What the hell do you do when you try to drown your demons only to find out they can swim?

Shane Smith, Jr. owner of Smith Construction, could see the emotional turmoil within his new employee — it’s why he hired him. There was something about the gorgeous, misunderstood man with the overly expressive eyes that came to their small town with a past no one was willing to overlook. Shane could see the good in Llewellyn, and those eyes of his were a clear window to his soul. Shane wasn’t going to let the man live a future of solitude because his past had been plagued with deceit.

Llewellyn wasn’t sure what to think about Shane. After years of protecting himself from being tricked twice, he was now faced with worry again. What would happen to him if Shane didn’t believe his truth, and walked away? Llewellyn wasn’t sure he’d be able to survive being left alone. Again.

Review: Wow, I had a feeling this one was going to be good, and I was not disappointed. I absolutely fell in love with LLew, and Shane wasn’t too shabby either.

Llew is such a sweet guy. He spent 8 years in prison after being accused of rape by his high school (closeted) boyfriend after his parents caught them together. Add to that the fact that he was dominating him and had him tied up at the time, did not help matters any. With his boyfriend, Moss, being 17 at the time, Llew was labeled a child molester. This did not bode well for him in prison, but he managed to get through, barely, with the help of a gang leader, Ace, who took him under his wing.

After his release, and realizing he could no longer work with his brother in their company without hurting business, Llew moves away to make a fresh start. It is a bit of a bumpy road, but luckily, he meets some pretty nice people, one in particular, who takes him in and gives him her apartment over her garage. Llew ends up getting a job at Shane’s construction company, which is where the story really starts to get going.

Shane is such a good guy. He never judged Llew, aside from assuming Llew was not capable of being more than a laborer, never looked up info on his past, etc. The two had an instant connection, and Shane made it a point to get to know Llew.

Llew has a pretty big issue though. Due to the events in high school, his now large, full-grown size, and his dominating personality, he is terrified of being accused again. This has resulted in impotence. Even when he feels a spark with Shane, the problem still persists. That is, until Shane comes up with a solution. Let me tell you, 8 years of no orgasms, along with Llew’s hesitance to show any of his alpha side, really made for some steamy hot scenes. I mean, smoking hot. These two have some major chemistry, and I could have read about them all day.

There are still a few bumps here and there, especially with Moss, but everything works out ok in the end. I loved that we got to see Ace (and his now hubby) again. He was a really nice addition to this story that I wish we had gotten more of. Llew was such a fabulous character, and I felt we really got to know him and his struggles and issues. Shane didn’t get as deep, but he was wonderful as well. This is definitely my favorite of Ms. Via’s stories, as I really didn’t want this to end. I was definitely not ready to let Llew and Shane go and hope we get to see them (and the other guys) again in the future.