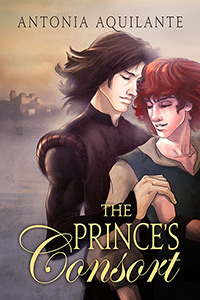 Blurb: Legends tell of large cats defending the principality of Tournai, but such creatures have been lost to time.

Prince Philip inherited the throne at a young age, and since then, his life has centered around ruling his country and resisting those pressuring him to take a wife and conceive an heir—forcing him to hide his attraction to men. When kind-hearted Amory is offered to the prince in exchange for more time for Amory’s father to complete a commission, both Philip and Amory are horrified. But Philip agrees to keep Amory at the palace, where they gradually become friends, then lovers. For the first time in his life, Philip is free to share not only his heart, but the magical shape-shifting ability that runs in the royal bloodline.

Neither Amory nor Philip imagined falling in love, and they certainly don’t expect the lengths those who oppose their relationship will go to keep them apart—maybe even resorting to murder.

Phillip inherited the throne at a young age and lived his life around the country. When Amory’s father offers Amory up as a pardon for a late commission both of them are mortified but that doesn’t stop Phillip from actually considering it. After all, if Amory won’t be his lover, he could always use a friend. When Amory says yes, their whole lives change for better and worse and as time goes on, their feelings for each other get deeper and deeper. Unfortunately, some people don’t like the fact Amory is Phillip’s lover and are determined to get rid of him at all costs. With the threat against his lover’s life, Phillip has to make some hard and selfish decisions.

I’m conflicted with this story. I enjoyed the premise and ultimately the characters but I had issues. As for the characters, I really liked that Amory was so sweet and kind but also had a backbone. If he didn’t really want to do something, he wouldn’t which I found endearing when it came to sticking up to his father. I also really liked Phillip and the fact he had no issues about being a little selfish when it came to Amory. To be honest, I didn’t expect him to be a cat so that was a pleasant surprise and I really liked that Amory was so understanding and accepting of Phillip’s shifting. What I really adored, though, was where the story eventually went. I had a few suspicions but didn’t really expect a publisher like Dreamspinner to publish a certain thing so I was definitely pleasantly surprised by it!

As I mentioned, I had a lot of issues with this one. My two biggest issues, though, was how much sex there was… way too much for my liking and also how much telling there was. This book had so much potential but the fact the author decided to ‘tell’ the story instead of ‘show’ it really hurt it, IMO. I wanted to see the characters get to know each other not be told they talked all night and learned so much about each other. Add to that, there were some secondary characters I found annoying (Phillip’s sister… could she be any more immature and selfish?) and felt like the ending was way too easy and predictable.

In the end, though, I liked the premise of the story and loved where this author took it. There’s not many mpreg stories out there (which reminds me… was this the first one DSP published??) and I liked that Phillip finally decided to be a little bit selfish instead of succumbing to everyone’s wishes of marrying a female. I’ll most likely read more from this author, in this series, because I’m interested to see a few of the other male characters get their stories 🙂