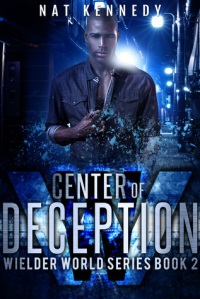 Blurb:  August Whalen—force Wielder, proprietor of the Black Castle, and smuggler of rare and fine goods—is torn from his sleek and cushy lifestyle by an unwanted discovery in the back alley of his bar: a body. Now, trapped between a male Wielder cult and the Bureau of Wielder Services, August must play a dangerous game with an end goal that shifts from finding a killer to staying alive.

Center of Deception is the next novella of the Wielder World series—gay urban fantasy full of danger, desperation, and dedication born of trial and blood.

Review: This is book 2, but it takes place over the same time period as book 1, Edge of Desperation. While it could be read first, I think you get a better understanding of what is going on in this world if you start with book 1.

Because this story takes place during the same time period, we generally know what happens here. But, this is the story of August, the man who was undercover in the cult, so we get to see his side of things and how he ended up helping in the fight against the cult. We see how he meets Kyle and Reggie, a little more about what happened while Kyle was with the cult, etc. The story comes full circle with the raid and their escape, bringing us up to speed where the previous book left off.

I really enjoyed seeing August’s side of things and learning more about him. Each of these guys face a different struggle when it comes to using their powers. The cult’s purpose was to create more powerful men, as opposed to helping them be able to control their Taint and heal. The men were basically guinea pigs, and though some were voluntary, others, like August, were not, and the enhanced powers he gained through the forced injections are causing him some major problems.

This installment has made me even more eager for the next one where it feels like the story will really start to move forward. I can’t wait to see how the three guys make out from here. Will Reggie and Kyle give in to their feelings? Will Reggie be able to help them, and especially August now that he really needs some help? Will they be able to remain somewhat under the radar of the authorities, especially now that they were involved in the cult takedown? Will they end up in a relationship together? There hasn’t been much in the way of romance up to this point, but it feels as though that could change.

I like the writing style of this story. It gives you enough information to know and understand the world and what is going on, but not too much that you feel overloaded. While there are some gruesome aspects to it, again, nothing is too overly done. There is a lot going on here, but I am really excited to see what happens next and am really looking forward to book 3.