Posted on March 1, 2019 by thebloggergirls 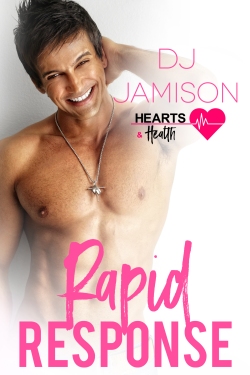 Firefighter Sean Connolly is straight — until one impulsive night changes everything. He tries to dismiss it as a fluke, but when a fire rescue leads him back to the guy who blew his mind, he’s thrown into a chaos of confusion and want. He gives in to curiosity, exploring a new side to himself — not just his attraction to a man, but his desperate need to please.

But as feelings deepen, doubts surface. Sean is in the closet, and Jace struggles to trust his promise that it won’t last forever. With family conflict and his career in the balance, Sean finds it difficult to picture his life without secrecy, but if he doesn’t find a way, he may lose the one person he most wants to please.

Rapid Response is the longest novel of the Hearts and Health series at approximately 92,000 words! It can be read as a standalone.

An Excerpt from Rapid Response

Sean glanced into the mirror, and though he looked like the same guy on the outside — dark hair, dark eyes, unremarkable face — he didn’t recognize the one on the inside. And that was scary.

“For what? Staring at my mouth, or for hiding from yourself?” Jace asked caustically.

Sean swallowed hard. His traitorous eyes found Jace in the mirror, locking on the mouth in question. Pink, full lips. Jace had been a good kisser. A good … sucker.

Sean jerked his gaze to Jace’s eyes, which bored into him, their power not diluted in the slightest by the mirror acting as their go-between. Could Jace see what was inside? If he could…

“What, Sean? What didn’t you realize?”

“That you like my mouth? That you want it on you again? That you—”

Sean spun around. “Shut up.”

His breath caught. “What?”

Sean hesitated, and Jace smirked. “Yeah, I didn’t think so.”

Frustrated and frazzled, Sean acted on instinct, doing exactly what Jace had asked. He grabbed the front of Jace’s shirt, spun him around, and shoved him against the counter containing the row of sinks.

Then he kissed him.

To make him shut up.

It was the only way to get him to stop talking. Gloating. Jace had practically ordered him to do it, the bastard. And Sean needed to shut up the doubts in his head, too.

He closed his eyes, blocking out all thought, and sank into the feeling of Jace’s perfect, hot mouth on his again.

DJ Jamison is the author of more than a dozen m/m romances, including the Ashe Sentinel series and the Hearts and Health series. She writes a variety of queer characters, from gay to bisexual to asexual, with a focus on telling love stories that are more about common ground than lust at first sight. DJ grew up in the Midwest in a working-class family, and those influences can be found in her writing through characters coping with real-life problems: money troubles, workplace drama, family conflicts and, of course, falling in love. DJ spent more than a decade in the newspaper industry before chasing her first dream to write fiction. She spent a lifetime reading before that, and continues to avidly devour her fellow authors’ books each night. She lives in Kansas with her husband, two sons, two fish and, regrettably, one snake.

As part of this blog tour, DJ is giving away a $10 Amazon Gift Card!!! To enter, just click the link below!