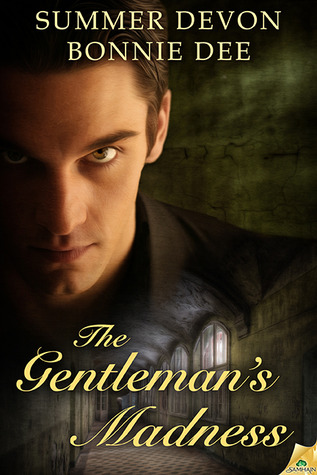 Academic John Gilliam thought being caught embracing another man was the worst that could happen. Until he agrees to “treatment” at an asylum, where a vicious attack leaves him shaken and afraid.

But having all means of writing or reading taken from him… That is a serious threat to his sanity. Then a moment of kindness from an asylum attendant begins to restore his dignity.

Sam Tully feels sorry for the patient everyone calls “the professor”, but with a back injury that cost him his job on the docks—and without the education that would have bettered his position—he tries to keep his head down, and a tight lid on his attraction to men.

As John prays for freedom, he grows closer to the gentle, innately intelligent Tully. In spite of themselves, forbidden attraction leads to touches, kisses, and more. But there’s something other than curative treatments going on at the asylum. When John and Tully uncover a heinous conspiracy, their very lives are in danger.

I just couldn’t wait to get my hands on The Gentleman’s Madness; the latest Bonnie Dee and Summer Devon collaboration. These two are at the top of my auto-buy list when it comes to historical romances.

As you already know, in most gay historical romances, the characters are able to keep their considered “deviant behaviors” behind closed doors and away from discovery. But what happens to that man who has been caught in a compromising and perverse situation? The man who has been incarcerated for his so-called “illness”? Its London 1887, and John Gilliam is that man; a young academic committed to an insane asylum by his wealthy family to be “cured”. After being assaulted at the first facility, John has been moved to the wealthy wing of Fairpark under the care of Dr. McAndrew. There he meets Sam Tully, the big muscled, uneducated attendant who has been hiding his secret attraction towards men since gaining a job at Fairpark. Of course, both men are immediately attracted to each other and John takes on sweet, gentle Tully as his new student. The attraction between them soon sparks a dangerous affair…one that could be the end of them if ever discovered…

The setting: I think the biggest thing that stands out for me in this book is the setting; I’ve never read an actual romance set entirely in an insane asylum. It was dark and scary, and not a place to stimulate a romance, but it worked. A very sweet and beautiful romance develops during the midst of all the dark undertones.

The characters: I adored both John and Tully. John has been so traumatized and his despair from losing his freedom has nearly broken him. And then Tully arrives to bring some light back into his days and even darker nights. John comes from a rich influential family, and Tully comes from the docks; John is highly intelligent with a very active mind, and Tully is a laborer who is used to “smarter” people telling him how and what to think. Two men as opposite as can be…but equal in so many ways that nobody sees. Such intense chemistry between them. I loved these two soooooo much!

The dialogue: So much beautiful dialogue here. I had numerous passages highlighted on my Kindle but this statement from Tully never left me: “You mistake me, I think. That sort of thing, that talking beautifully, is rarer than what you call normal life around here. I imagine it comes from all those books you read.”

The pace: It took me until about 10% before I really got hooked into this one. Its not a rushed setting and the romance is very slow burn…two things that I LOVE! Also, there isn’t a lot of sex in this one compared to what I’m used to reading from these authors. While all those things may not work for some people, it worked 100% for me this time.

The mystery: There was bit of mystery surrounding some dark secrets going on at Fairpark; its not too difficult, nor too surprising, but it did have me guessing there for a while.

The ending: I felt that the “big reunion” between John and Tully near the end was cut off too abruptly! But when I saw “Two years later…“, I was a little more relieved. Plus, it was a beautiful and sweet HEA, but I still wanted more from that reunion.

In summary, I really loved this story. It definitely ranks up there along with my love for The Gentleman and the Rogue, another story I highly recommend from these two authors.

Overall Impression: I loved it.