Young Adult Week! Review: Under the Bridge by R. Cooper 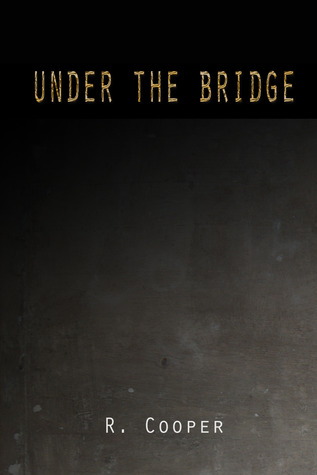 Blurb: Grad night is supposed to be a night of carefree celebration before growing up and leaving childhood behind, but after graduation Chris is spending his night wandering streets alone with a black eye and a split lip. Beat up yet again for being out and proud, he is contemplating how glad he’ll be to leave his childhood, and this town, behind, when he stumbles across the town’s other outcast, his childhood best friend, Nick. Chris hasn’t spoken to Nick in years. When Nick was thirteen his family moved away, and when they came back to town a year later, Chris had a new stepfather, a new set of bruises, and no interest in being friends with Chris or anyone else. He’s spent high school getting into trouble and breaking hearts while Chris has been getting ready for college. On the surface they couldn’t be more different, but it isn’t long before Chris starts to see that Nick is just as scared and lonely as he is, and just as used to pain.

This was a really sweet but sad story about two guys who just graduated from high school.  Poor Chris has been out since his sophomore year but has been getting beat up over it on a regular basis.  He is constantly scared but never backs down, more afraid of letting them know they are getting to him.  He is such a sweet soul that it is hard not to feel for him.

Nick is a bit of a bad boy with a reputation with the girls.  It seems Chris and he were friends when they were younger but that Nick hasn’t given him the time of day in quite some time.  So much so that Chris is a bit surprised Nick is talking to him now.  They find each other on the street after Chris suffered yet another beat down from the jocks.  They spend time under the bridge, drinking and gingerly talking to each other which then leads to a bit more.

Unfortunately, this story is so short that you only really get a glimpse at their lives.  They are both on the precipice of the next stage of their lives following high school.  Sadly, their plans seem to be sending them in opposite directions.  This story takes place in one evening that I found was just not long enough for my liking.  I wanted to see more of them, more of their exploring and to finally see them find some happiness.  I was quite impressed with the writing here and definitely hope to see more from this author.

One thought on “Young Adult Week! Review: Under the Bridge by R. Cooper”