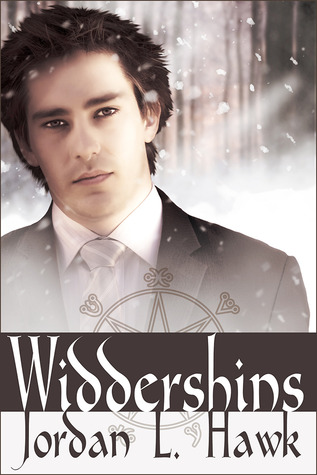 Blurb: Some things should stay buried.

Repressed scholar Percival Endicott Whyborne has two skills: reading dead languages and hiding in his office at the Ladysmith Museum. After the tragic death of the friend he secretly loved, he’s ruthlessly suppressed any desire for another man.

So when handsome ex-Pinkerton Griffin Flaherty approaches him to translate a mysterious book, Whyborne wants to finish the job and get rid of the detective as quickly as possible. Griffin left the Pinkertons following the death of his partner, hoping to start a new life. But the powerful cult which murdered Glenn has taken root in Widdershins, and only the spells in the book can stop them. Spells the intellectual Whyborne doesn’t believe are real.

As the investigation draws the two men closer, Griffin’s rakish charm threatens to shatter Whyborne’s iron control. When the cult resurrects an evil sorcerer who commands terrifying monsters, can Whyborne overcome his fear and learn to trust? Will Griffin let go of his past and risk falling in love? Or will Griffin’s secrets cost Whyborne both his heart and his life?

When Heather told me to read Widdershins last year, I said no way. I’m not a fan of historical stories and while I can tolerate paranormal historicals better, it’s not exactly a genre I’ll read without a heavy dose of prompting. So when this was chosen as my challenge book, I was slightly dreading it. Thankfully, my worries were for nothing because I ended up loving the story!

Widdershins tells the tale of Whyborne as he’s tasked with translating something for Griffin Flaherty, a private detective who’s investigating the murder of a wealthy man’s son. Neither man has an idea what they’re getting themselves into and as their investigation gets more intense, they’re thrust into a world filled with the cults, secret societies, resurrections and sorcery well beyond either of them could imagine.

One of the things I adored about this book was the setting. I loved how the author was about to weave the history of a town into the making of a mystery. Unraveling all the secrets that surrounded the town’s founder and how everything related back to that point. Things weren’t as easy as it all seemed and I loved how it all played out and how we slowly learned of each piece of the mystery as it was revealed and then finally watching it all come together. And seeing it all happen made for an ending that left me on the edge of my seat!

The characters, though, were certainly my favorite. Whyborne was just this adorably awkward man. Uncomfortable in his own skin when around other people. I loved his stutter and his inability to hide his nervousness or embarrassment. He was just so damn adorable! Griffin was a good match to Whyborne with his charming nature and self-confidence. The two together were very sweet and hot but, most of all, I loved that they were so vulnerable with one another and how Griffin was able to stroke Whyborne’s confidence out of him. They were just lovely.

I only had two issues with the story. One, there was a little too much sex for my tastes and two, Griffin’s constant use of ‘my dear’ for Whyborne grew too repetitive for me. I couldn’t help but think of Griffin as an elderly grandfather every time he would call Whyborne that. Don’t ask why, that’s just where my mind went whenever he called Whyborne ‘my dear’! Especially during sex…

All in all, I really enjoyed this one. It has a great cast of characters with an intriguing mystery and a sweet romance. I’m looking forward to continuing on with the series and seeing what other mischief Whyborne and Griffin get themselves into!