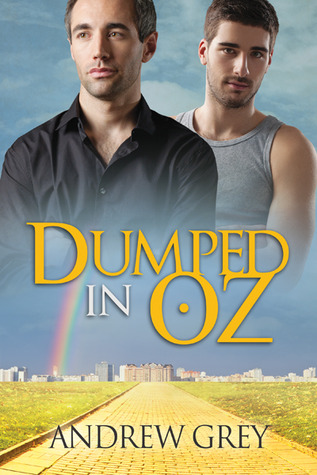 Blurb: Because of an opportunity he’d be a fool to turn down; Lyle Powers transfers to his company’s warehouse in central Kansas. The last thing he expects is to meet another gay man in the small town, let alone one who captures his interest.

Roger Kypers is a recovering alcoholic with a twelve-year-old daughter he only gets to see for part of the summer. Neither Lyle nor Roger is looking for a relationship, and they fumble at the start, yet emotions build as Roger shows Lyle the landmarks of Oz.

But when Roger’s wicked witch of an ex-wife threatens to take his daughter away for good if he doesn’t act “normally,” he’s faced with the challenge of letting her get away with it, or fighting to accept himself and standing up for what he knows is right.

Two men, who each carry their own burdens, find each other on the yellow brick road in Oz. Sounds like a witch should be involved…and guess what? There is!!! And she was so awful she put the wicked witch from the west to shame. Sadly this witch is the ex-wife of Roger and the mother of his teenage daughter. A more homophobic person you will never meet, well, except for maybe her brother Mark. Those two can cause some serious problems…and do.

Roger and Lyle meet the first day Lyle ends up in Oz for a yearlong job transfer. Like attracts like and they seem to have an instant attraction to the other. It takes a little while for Roger to get up enough nerve to admit the attraction on his end, but he has great reason….note the witch above. Said witch has threatened to take his daughter away, and Roger is too afraid to rock the boat in protest. He is willing to put his life on hold to keep the peace…even if that means hitting the bottle to escape from his pain.

Roger is living a nightmare but doesn’t realize that the majority of the town is on his side, and already knows that he is gay. They just don’t care, it doesn’t matter, and eventually when he stops hiding who he is, he realizes that his small town really is the magical Emerald City. A small piece of heaven that he can live out his life in, openly and honestly, with Lyle and his daughter.

Lyle was floundering in his hometown of Harrisburg, PA, but still fought his transfer to a small town in Kansas. Once he realized, with the help of his friends Chuck and Don that he needed to make a change then he accepted the inevitable and moved on. Turned out to be the best decision of his life…starting day one when he meets Roger. Amazing that he lived in a bustling city and was lonely, but only one day in tiny Oz and he is already glomming on the local restaurateur…and the attraction is returned.

Sometimes you need to make a change, and in this case, realize that home is not a small condo in Pennsylvania but where your heart is. For Lyle, his heart is in Oz and when he clicks his heals together that is exactly where he wakes up and couldn’t imagine being anywhere else.