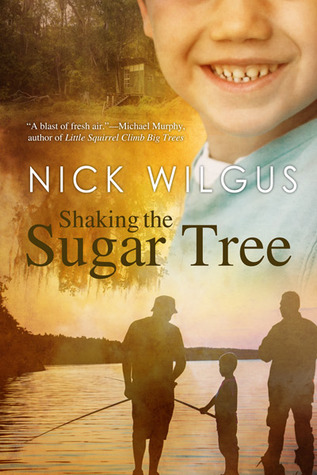 Blurb: Wise-cracking Wiley Cantrell is loud and roaringly outrageous—and he needs to be to keep his deeply religious neighbors and family in the Deep South at bay. A failed writer on food stamps, Wiley works a minimum wage job and barely manages to keep himself and his deaf son, Noah, more than a stone’s throw away from Dumpster-diving.

Noah was a meth baby and has the birth defects to prove it. He sees how lonely his father is and tries to help him find a boyfriend while Wiley struggles to help Noah have a relationship with his incarcerated mother, who believes the best way to feed a child is with a slingshot. No wonder Noah becomes Wiley’s biggest supporter when Boston nurse Jackson Ledbetter walks past Wiley’s cash register and sets his sugar tree on fire.

Jackson falls like a wet mule wearing concrete boots for Wiley’s sense of humor. And while Wiley represents much of the best of the South, Jackson is hiding a secret that could threaten this new family in the making.

When North meets South, the cultural misunderstandings are many, but so are the laughs, and the tears, but, as they say down in Dixie, it’s all good.

Nothing I can say will ever come close to adequately describing the brilliant awesomeness that is this book. I feel like I hit the reader’s jackpot and am a better person, a better reader, and a better reviewer for having the privilege of experiencing the life that is Wiley Cantrell, and by extension, Jackson Ledbetter and their son, Noah. It’s not very often a book gets a strangle hold on me but this one grabbed me from the get-go, and wow, what a strong grip that wouldn’t let go.

From the start I laughed out loud…not just a little “lol”, but a deep, gut clenching belly laugh. But I also cringed for the horrific way that Wiley was treated. A man who did everything that a straight man would have been praised for, but instead he was constantly pissed on for daring to do right by his deaf child. The love and affection that Wiley has for his son and Noah for him is like a breath of fresh air. Noah “checking in” was just so beautiful. Their interactions were pure love and I could not understand how anyone could possibly consider that a bad thing. Small minds just kill me…and there were plenty in this story.

The blurb gives you a pretty good idea what this story is all about, but what it can’t do is allow the reader to experience this amazing journey. It’s a journey that isn’t bogged down in excess details but still vividly allows the reader to experience this world in all its southern charm. The chapters are short but it’s what works best and there is not one word that was unnecessary. The humor and total inappropriateness that comes out of Wiley’s mouth and that of his grandfather was pure magic. That humor is what made this girl a fan of Nick Wilgus. If this were the Olympics of Novels I would be holding up my sign depicting the number 10 and then handing out the Gold medal. Yes, it’s that good and will undoubtedly be on my Best Books of 2014 list.

It’s the love story of a poor, lonely, gay father and his special needs son. A man who uses humor to cope with his very difficult life and the fact that no one expects him to succeed, no one offers him any assistance, and everyone thinks it’s okay to ridicule anything and everything that Wiley does. It’s quite sad the way he is surrounded by family, but still completely alone. It’s shocking, but not, that there are small towns with small minds that care more for their sensibilities than for a small deaf child and the father that he adores.

This is also the love story of Wiley and Jack. They have their ups and downs but they love each other…and Noah.  Wiley and Noah are a package deal and not only does Jack accepts these terms, but he embraces Noah with both hands and his heart. Truly, this is an amazing story but I can only think of so many ways to describe the brilliant writing of Nick Wilgus. Nick is a new author for me and I am very thankful that this book showed up on my radar. Now all I have to do is try to get others, to get YOU, to experience what will no doubt be on many people’s Best Books of 2014 list.

So, I will leave you with this. I rarely read books with children, I rarely read books where the sex scenes fade to black, I rarely read authors I am unfamiliar with without someone else reading it first, and I rarely text my fellow reviewers and tell them to “stop what you’re doing and read this book, you will love it, I guarantee it”, but I did all of those things and I will continue pushing this book because it is all that and I want to share the experience. So please, read this, you will thank me, and then I will say, “I told you so”.

Overall Impression: It was AMAZING