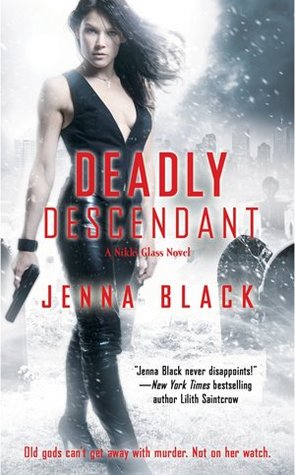 Blurb: An ancient evil is unleashed in the modern world— unless one fearless P.I. can hunt it down. . . . Nikki Glass, Immortal Huntress, returns in this new novel in the acclaimed series by Jenna Black.

As a living descendant of Artemis the Huntress, private investigator Nikki Glass knows how to track someone down. But when an Oracle shows up, warning the Descendants about wild dog attacks in Washington, D.C., Nikki is afraid it might be a trap. The Olympians believe the “dogs” are really jackals, controlled by a blood-crazed descendant of the Egyptian death-god Anubis. Whatever. . . . If Nikki hopes to muzzle Dogboy, she’s got to catch him in the act. But when she stakes out a local cemetery, she ends up face-to-snout with a snarling pack of shadow-jackals whose bite is worse than their bark. These hellhounds are deadly—even for an immortal like Nikki. “Dog” spelled backward may be “god,” but that won’t stop Nikki from teaching these old gods some new tricks. Like playing dead.

Now that Nikki’s firmly claimed Anderson’s ragtag group of Liberi as her home and immortal family, she’s still trying to get used to life working for Anderson. When the Oracle from the Olympians comes to Anderson for help in catching a descendant who’s going on a killing spree, she’s forced into hunting him down. The only problem is this descendant is not only wielding shadow jackals as his weapon but he’s also insane who has no issues killing his own kind… but one Liberi can’t kill another, right?

Ahhhh, Nikki *sigh* This was such a fun, fast-paced novel I literally devoured it. Nikki is still her slightly snarky self that is determined to keep her old life or at least a part of it. With this one, we see a little more of how her powers work. We also see her relationship (if you can even call it that) with Jamaal grow deeper even if it is on rocky ground. On top of that, things get very deadly for Nikki when she not only has to worry about an enemy from the outside but from the inside as well.

I think my only issue is how Nikki treated Blake. I understood why she didn’t like Blake and Steph starting a relationship but at the same time, considering everything Blake has done to keep Steph safe, I expected Nikki to cut him a little slack. Not to mention, Steph knew exactly what she was getting into and told Nikki over and over that she would take her chances. Live and let live is what Nikki should have done especially since Steph has the same feelings towards Jamaal as Nikki has towards Blake.

There were other things that I feel I should mention only because I know readers will take some issue with them. Such as Emma’s misplaced jealousy towards Nikki that turned her into a huge bitch, Nikki’s back and forth on what to do with Anubis’s descendant and even the special attention Anderson is giving Nikki. All of these things, I didn’t have a problem with because all them will no doubt lead to what happens in the next book, which I think might be epic. On top of that, Nikki’s constant questioning on what to do with the deadly descendant separates her from the other Liberi and shows to me that she’s still human even if she is immortal now.

In the end, this was a gripping tale I was sucked into right from the start. I couldn’t put it down once I started it and while I’m a little nervous where the story is heading (love triangle? Please no!) I can’t wait to read more of it.