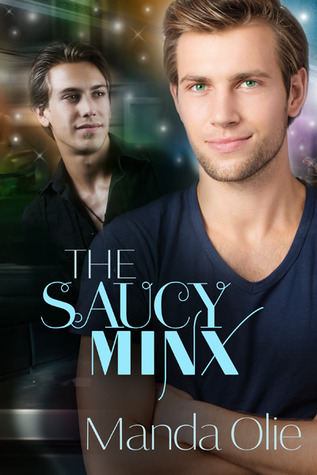 Blurb: With a touch of the magic that gives his recipes a culinary kick, Jack Killian has been running his restaurant, the Saucy Minx, for nearly a decade—almost as long as there’s been a spell out there promising to knock him off his feet should he ever meet the other half of his whole. Each day Jack delights his clientele by magically imbuing his food with taste and emotion, even as he slowly loses hope that the man of his dreams even exists.

But when he hires a new dessert manager, his whole life turns upside-down, because his dream man does exist—and he just strolled into the restaurant on someone else’s arm. While conducting business as usual, Jack struggles through what it means when destiny hands you the perfect man on a platter you’re not allowed to touch.

This was a cute little story about Jack, who’s spent the last decade of his life knowing there was someone out there just for him but unable to actual find him. Unfortunately, when he finally meets that person, the guy is already in a relationship with someone else. Jack, with his friend Andrew, try and fight the urge to take the men that belong to them and when things finally start to look up for Jack, he’s not sure if he’s ready to finally have his soul mate.

I actually really liked this story. It’s different in the way that the magical abilities were handled, such as the use of it on food to keep it fresh or of writing notes to a person on their skin. It was different and a little refreshing. The characters, specifically Jack, were confused on how to handle the situation they were in. Although they didn’t have much depth to them, I found Chris to be very exuberant, which was the opposite of how Jack was acting. Still, I found the way they fumbled around one another oddly cute.

However, while I really liked the beginning, I felt like the second half of the story was very rushed. Once Jack and Chris finally got together, there was a lot more telling than showing. I would have liked to actually see these two telling stories about their family. More than that, I found the setting and the explanations behind the witches and their magical abilities really vague to the point that I had no idea how it all worked for them, if they had specific abilities, what exactly the special menu consisted of, etc. So, a lot of questions that just weren’t answered in such a short story.

All in all, this was a fun little tale and even though it’s very light on descriptions and explanations, I still enjoyed it. I’d have also liked to see how Andrew and Grant got together but I’m hoping the author decides to give them their own story, even though by the end of this one the reader already knows how it works out for them.