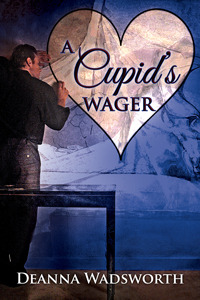 Blurb: The name’s Lio, and I’m a cupid working for the Gay Division of the Inter-Dimensional Association of Cupids. An Aztec god, whose modern name, Ethan, doesn’t make him any less scary, just busted me shooting a closeted human with a gay lust arrow. I might find him sexy with all those tattoos and piercings, if I didn’t have a rule against getting it on with other supernaturals—especially ones working for the Straight Division. Now, to save my butt I’ll have to strike a bargain with this tough god. But what I didn’t see coming was my little wager not only risks my career, but places my broken heart completely in Ethan’s hands.

A part of the “A Valentine Rainbow” set of 14 holiday stories.

Right from the blurb I knew this short story was going to be funny and I was right. Lio is a sassy gay cupid who is only a touch bitter about ‘true love’. He’s been burned in the past by lovers who have only used him to steal his powers and he’s not going to get burned again! Until Ethan shows up and shatters all the barriers Lio has against sleeping with his own kind. I loved that Lio was so quick to give a sarcastic or catty comment but I also liked that Ethan was able to banter back with him. Where Lio is fun and bitter, Ethan is dark and solemn but still believes in love. They are complete opposites.

I loved them together but readers should be aware that, while these two have a connection that they obviously act on, this isn’t exactly a romance in the general sense. Basically it is a one night stand with the possibility of something more in the future. Also, readers should be aware that this story includes a good amount of voyeurism and not only that but it is what ultimately leads Lio and Ethan to do what they end up doing.

While I liked that Lio forced Ethan to ‘come to the dark side’, I found that this really wasn’t my kind of story. As someone who doesn’t enjoy a lot of sex in the books I’m reading, I found this one to have way too much sex for my tastes. Not only are Lio and Ethan getting it on for half the story but before that, they’re watching another gay couple go at it too and for me, that was just too much. Not to mention, I felt like the story was very open-ended and left me with a ton of questions like why Ethan kept saying certain things and then never explained them.

In the end, this a cute story. I loved the beginning and I loved that there was such a good connection between the two but the story was too unfinished and had too much sex for my tastes. However, that is a personal preference so anyone looking for something short with a good amount of humor, a clever setting and some hot sex should totally give this one a try!