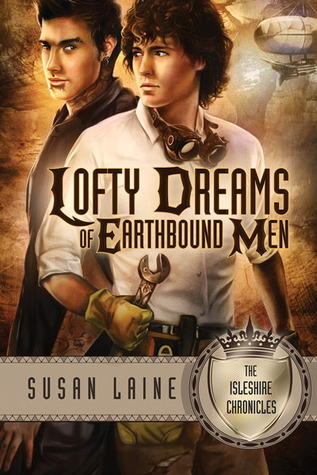 Blurb: On the night of the summer solstice, Obadai Bashim encounters Jules Sterling, a young engineering sage. Jules is on the run from a ripper, an assassin of the Theocracy who has already killed his master. Open atrocities by rippers are unusual in County Isleshire, where freedom and acceptance reign over prejudice.

However, political instability between the Five Kingdoms and the Divine Theocracy has set the theocrats on a mission to crown religious doctrine over science, and the Sage’s Guild is number one on their eradication list. If Obadai helps, he’ll have a price on his head too, but he can’t abandon Jules.

Escaping the ripper’s clutches is not enough. Jules has a mission of his own: to repair a faulty airship inn about to crash into the fortified township of Dunbruth. Luckily, Obadai has a few magickal secrets up his sleeve.

When I read the blurb for this story, I was immediately intrigued. As someone who loves fantasies, I find unique and complex worlds fascinating. So, right from the bat, this story had a lot of potential for me to enjoy it especially mixed with that cover and an edge of steampunk, I was all too eager to get started. Unfortunately, while I loved that the author put so much effort into the world building, the length of this story really hindered not only my enjoyment of it but my understanding of what exactly was going on.

To put it simply, Jules is an engineering sage who’s Master has been killed for conducting an illegal project… or harboring an illegal machine part (I’m not sure which). As such, creatures known as rippers were sent out to kill him and Jules. Fortunately for Jules, he was able to escape and ends up coming across Obadai, someone with seed magick. Knowing just how much danger Jules is in, Obadai agrees to help him fix an airship but before they can complete their task, the ripper shows up with the intention of punishing both of them and the punishment for their supposed crimes? Death.

Let me just say that I really liked these characters. Obadai is a strong, confident man who is willing to help someone when the situation calls for it. In contrast, Jules is more timid and shy unless it has to do with tinkering with machines and then he’s a whole nother person. In this story, the relationship between Obadai and Jules is just starting. Literally, it is like a seed in the ground: it’s been planted and just waiting to grow. The two together are both sweet and fierce and even though they just met, they are all too willing to put their lives on the line to save each other.

The best thing about this story is the world but unfortunately it is also the worst thing. Since the story is so short and the world is so massive, the author tried to cram so much information into a little over 17,000 words. The result of which only left me confused and frustrated. Not to mention there were so many unique words to describe the land, country, creatures, etc. that I kept stumbling over them because I didn’t understand what they meant and most of the time, they weren’t explained in a simplistic way. The beginning is particularly hard to get through because it is filled with a lot of info dump in an attempt to understand the setting but because of that, for me it was just a bunch of nonsense I couldn’t decipher. Add to that, there were a lot of complex names and individuals mentioned that didn’t seem necessary in the grand scheme of things.

To put it mildly, this was only an okay story. If this story had at least 100 more pages, the author could have spread out the descriptions on the world, the inhabitants and the numerous people that were mentioned but never appeared in the story and it would have been fine, or at least more understandable, but because there was just so much information to learn and understand, the end result was not comprehensive for my simple brain 😦 I liked the characters and I liked the concept of the mission Jules had to go on but as much as I wanted to enjoy the book, it was hard to really get into the story when so many details were pushed together in such a short tale.

As it is, while this is the start of a new series and wasn’t as good as I was expecting, I’m willing to give the sequel a try in the hopes that most of the information told in this story won’t weigh down the rest of the series.