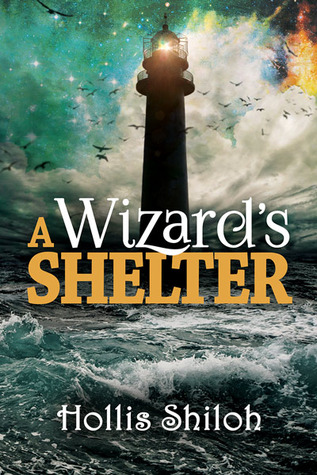 Blurb: Visiting his sister Mary at the lighthouse should be a delightful vacation for Elliot–except he’s going there in disgrace while he awaits his fate from the wizard council.

Mary’s assistant, Rue, is a gentle, self-possessed young man about Elliot’s age. Elliot is drawn to him, and his magic seems to calm down around the handsome and mysterious Rue. Elliot sinks gratefully into the unexpected grace of Rue’s kindness and friendship. He doesn’t understand why his magic is broken or why it feels whole again around Rue. But right now he’s just trying to survive, grateful for the reprieve Rue’s friendship provides.

But then a a potential tragedy on the beach culminates in Rue revealing his true nature: he’s a selkie, both man and seal, with a magic that somehow complements and heals Elliot’s when they’re together. And that might not be possible for much longer.

Wow, this book… I just don’t really know what to say. This is by far my favorite book from Hollis Shiloh so far!

A Wizard’s Shelter tells the tale of Elliot who is a disgraced magician sent home to his sister because he recklessly collapsed a building using his magic. Depressed and miserable, he just wants some familial comfort from his twin sister but when he arrives at her lighthouse, he meets Rue, his sister’s assistant. What starts as a friendly relationship blossoms into something completely foreign to Elliot that he’s not all too comfortable with. On top of that, Elliot’s magic has turned wild and uncontrollable and the only thing that saves him from total destruction is Rue’s selkie power that grounds him. But selkie’s mate for life and Elliot doesn’t know if he can be with a man but he can’t seem to live without Rue. When a magic judge comes calling, will any of it really matter in the end?

I really enjoyed this book to the point that I got so sucked into it that I didn’t realize how much time had passed until I finished. While the story is an average novella size, it neither feels too long nor too short. It was the perfect length to get the point across. I especially loved the characters and how they balanced each other out. Rue is calm, collected and grounded while Elliot is lost, confused and out of control. They complement and understand each other and ultimately they are very sweet. They start out as friends and become very comfortable quickly and it isn’t until Elliot’s sister brings it to Elliot’s attention that he realizes there’s possibly more to what they have than strictly platonic feelings. It’s sweet how oblivious he was but even sweeter because of how Rue handles it.

I think my only issue with this story is that it was a bit repetitive. The writing at times was a little stunted but mostly there were a lot of repetitive words, repetitive phrases and even observations that kept being mentioned. It wasn’t horrible but it stuck out enough for me to notice and, especially in the beginning, made me stumble over the sentences.

Besides that, this was a great book. I loved that it dealt with a different kind of shifter and even more so that the author used selkies. There are so many mythical and unique shifters out there that it’s always a delight to read one that isn’t written about often. The characters were cute and I adored their connection and I really liked the conflict of wild magic. Overall, a delightful read that I definitely recommend for anyone looking for something short, sweet and interesting.