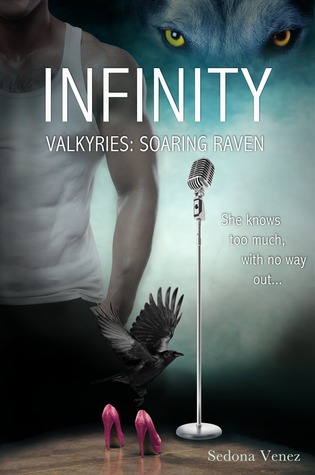 Blurb: The first moment I saw Boulder… his helmet-covered head snapped in my direction and stared.

My eyes greedily took in the hardness of his thighs encased in dark jeans, his kickass motorcycle boots, and leather jacket. I licked my bottom lip, stifling the crazy urge to leap out of the car and climb him like a tree while burying my nose into the crook of his neck like a possessed woman.

I needed to see his face, and as if answering my request, he pulled off his helmet impatiently, and literally, something clicked in my head as his warm apple-green eyes locked onto me and he muttered, “All mine.”

Well, that’s what I imagined he was saying as his lips moved silently. He could have been whispering, “Stalker girl,” but hey, I was willing to stalk him into submission.

Let me first say that I decided to read Infinity because the sequel, Infinity Unleashed, looked interesting and I really had no idea that it was the second book in the series. So, I requested the book but when I started it, I realized I was missing a LOT of information. I ended up buying this one so that I could get up to speed on everything that happened. I had high hopes for it even though I really had no idea what it would be about considering all the blurbs I found were just a snippet from the story. With that said, I was extremely unprepared for what I was getting into and honestly, pretty upset that the publisher and/or author did not do the book justice by providing an actual blurb to explain the story or at least provide a warning that there was a ménage in the making.

For example, the ‘blurb’ led me to believe that Boulder and Infinity would be the main couple in this romance story. Nowhere does it mention a third love interest in this. As one that doesn’t enjoy being blindsided by ménages (I avoid them, in all honesty), I was more than a little upset that around 80% into the book I find out that Infinity will not only have ONE mate but TWO mates. Not only that but neither of these guys make a LIVE appearance in the book until 59% for one and 80% for the other. I’m a lover of romance and what that means is I want to experience the courtship, I want a developing love ESPECIALLY when the book is labeled as ‘Paranormal Romance’. Instead, with this book, I’m pretty much getting straight up lust with Infinity going into something akin to heat for both Boulder and Torch in the last 25% of the book. To say I’m disappointed in not only realizing this series features a ménage but that it took literally more than half the book for either of the heroes to come into play, is a VERY BIG understatement.

Let’s talk about the characters, though. As a popular singer, Infinity has a lot going for her. She’s rich, she’s famous and she’s gorgeous. Unfortunately, she has the classic spoiled brat attitude where she doesn’t really care about anyone else but herself, she has no respect for others or their time or the fact that people are trying to help her. Instead, she acts like she’s the only person that matters and throws tantrums when she doesn’t get her way. Screaming at people and making their lives hell, not to mention making them wait on her, NONE OF THESE are attractive qualities. I had a very hard time liking her, to be honest. She’s hypocritical, self-absorbed and very, very selfish not to mention a drug addict. I found her constant answer of “I’m sober and not even taking any Rejuvenators” very annoying because she literally just popped two or three of them not hours before and was just thinking of popping another two after she was finished doing whatever she was doing. She’s heavily in denial. Then again, you can’t really expect anything different when the very people who ‘love’ her and want to ‘protect’ her constantly lie to her.

This leaves me to my next issue. Kara, Infinity’s adopted mother, is a Valkyrie that is the Immortals’ puppet. What this means is that she knows what will happen next and instead of informing others about this, she never tells anyone anything. Including Infinity. Apparently, Infinity is half-Valkyrie and half-wolf and instead of letting Infinity know this while growing up (honestly, I’m not quite sure why she never developed any powers or shifted considering she’s in her twenties now), Kara decides to hide the truth from Infinity. Actually, everyone in this story seemed to be some type of paranormal – vampire, Valkyrie, shifter, witch, etc. – that hid the truth from Infinity and this BAFFLED me. I didn’t and COULD NOT understand why it was so important to leave Infinity in the dark about who she was. Yet, they all kept telling her that it was important she didn’t act this way or that way, don’t draw attention to yourself, don’t let someone hurt you, learn to fight so that you can stick up for yourself and when she asked WHY any of that mattered, she was roadblocked by “You don’t need to know” or ignored. Honestly, I could not comprehend what the point of keeping Infinity in the dark was. If she had KNOWN what she was, maybe she wouldn’t have acted so stupidly so often in the book. Maybe she would have realized that she was important and that so many people wanted to use her and maybe she would have acted like a sane, responsible adult instead of a spoiled brat that threw tantrum after tantrum and unwittingly stepped into bad situation after bad situation while being able to understand that she’s really NOT crazy, just a supernatural being.

Now, with all that said, I found Kara and Infinity acted the exact same way. It was hard to differentiate between the two to the point that I even thought I was reading about Infinity when it was Kara’s POV! They had the same mannerisms, they had the same speech, etc. Since Kara is centuries old and considering how she acted in the beginning, I would have expected her to act her age, more or less, or at least more mature and not a teenaged girl like Infinity acted. It was very annoying how immature they both were and how secretive they were. IT JUST DIDN’T MAKE SENSE! This leads me to the fact that the book is written in both first person (from Infinity’s POV) and third person (from multiple different POVs). Honestly, it was confusing and really awkward when the third person POVs didn’t show up until half-way into the book, almost like the book was either written by two different people or that the author wrote the first half then put it aside to write the second half at a later date. It was not a smooth transition.

The plot of the story actually had a lot of potential and I DID find some of it intriguing. Unfortunately, the story is clogged with unnecessary purple prose, ridiculous descriptions of things that do not matter (such as a long thorough scene about Infinity, Zoe and Diego in a car talking about inane, unimportant things or the constant need to describe everyone’s clothing) and a lack of progression. The first half of the book could have been cut because all it showed was that Infinity is stereotypical and conceited. Not to mention the fact that she’s a virgin, sexy, gorgeous, beautiful, etc. is mentioned more times than most likely Boulder OR Torch’s name. The story stalled because the author focused too much on WHO Infinity is as a human and not who she is as a PARANORMAL. Besides that, the whole world was confusing. ARE vampires and shifters widely known? If not, then why doesn’t everyone know about them? WHAT was the Fire and Ash War? Exactly WHEN does this story take place? WHY is Infinity so important? While I understand that she could save the Others, nothing related to HOW or WHY they need to be saved is mentioned (besides a brief mention of their lack of reproduction). One last thing, this story ends on a major cliffhanger, to the point that not only was nothing resolved but now there is a new threat that takes of Infinity and leaves the story completely opened with absolutely nothing resolved… not even Infinity understand what she is.

With that said, I can’t recommend this book. The descriptions and tags associated with it are inaccurate and misleading. The blurb speaks nothing of the story, the plot, the characters, the direction the story is going in. NOTHING. All the females are immature and probably should realize that saying things like “Hell to the no!” makes them seem childish. It lacks depth in the world AND the characters that are important but yet focuses on characters and descriptions that bring nothing to the story but instead act as a filler. I was filled with so much frustration and annoyance reading this book that I’m sorry but I just did not like this one.

Overall Impression: It wasn’t for me