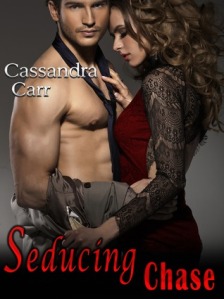 Blurb: When a researcher disappears with millions, Val Chase, the director of public relations at a hospital, faces the biggest challenge of her career. To make matters worse, the CEO brings in his old college roommate, a crisis management ringer and a man Val is convinced wants to make her look bad. She instantly dislikes the smooth-talking man with the expensive suit who threatens her very livelihood, even as she’s drawn to him physically.

Nate O’Halloran is just trying to do a favor for a friend and is caught off-guard by the sexy PR director who’s determined to handle this crisis without his help. His eagerness to rush back to his A-list celebrity clientele is waning by the minute, as Val’s beauty and fiery personality enthrall him. As Nate gets to know Ms. Chase better, for the first time in his life he sees how empty his existence is and a future that includes a woman.

As things at the hospital go from bad to worse, can he convince Val he’s more than a playboy and not out for her job?

Oh man, its been sooooo long since I read a plain ol’ male/female contemporary romance.  It was very refreshing for a change!

Val Chase works as the PR director at a large hospital specializing in cancer research.  When one of the researchers runs off with millions of dollars in donations and grant money to support his gambling habits, the hospital CEO calls in Nate O’Halloran, his old college buddy and PR to the stars, to help Val manage the hospitals reputation.  Of course, Val doesn’t want to have anything to do with Nate: he’s come in and taken over her job and making her look inadequate in front of her boss…too bad he’s the sexiest thing she’s ever seen!  Nate also feels the attraction between them and is determined to pursue whatever kind of physical relationship while they can.  There’s no risk to either of them since he’s only in town temporarily, right?

I really enjoyed the sexual tension between Val and Nate.  They hit it off pretty quickly but Val kept playing hard to get there for a while.  There’s some banter back and forth and some inappropriate activity in the work place that is pretty sexy.  I’m not a huge fan of romances with the let’s-fuck-around-while-we-can-its-just-sex trope because both characters never want to stand by what they are feeling; both act like it doesn’t mean anything beyond the sex.  So its sometimes harder for me to connect on that deeper level with the characters since they are refusing to connect with each other.  Does my rambling even make any sense anymore?  Anyway, there’s a decent level of heat here, but it doesn’t fit into my definition of erotica by no means.

Honestly (of course I’m always as honest as I can be) I had trouble staying interested in the hospital drama with the thief and the board of director and the money donors.  Hmm, it could be because I spend at least 50 hours a week working in a hospital?  Maybe?  Probably so.  Reading about hospital administrators trying to make themselves and their hospitals look good after something BAD happens…is too close to real life when all I want to do is escape from it.  Although Doug wasn’t a sleaze and I truly felt bad for the guy.  I hope he finds something better.

I think the biggest thing this story was missing was an epilogue, unless there are plans for a sequel?  The ending was just too sudden to give me closure on Val and Nate’s relationship and to make me believe in their HEA.  How is it going to work?  Is it going to work?  I don’t know.  Other than that, all the other barriers I had with the book were purely personal preference.

Still a good story, though!

Overall Impression: It Was Good!