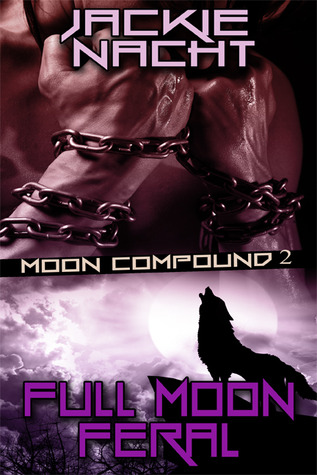 Blurb: With all great sacrifices for love, there must be consequences.

Brendan has been at Moon Compound and gone through his first shift. He feels like hell when his mate walks into his life in chains. Devastated that his mate is feral, he mourns for the mate he is bound to lose before he ever has him. Desperate not to lose his mate, he does something that will forever change his life. Will Brendan be able to save his feral?

Brendan is a sweet, quiet shifter that has just experienced the agony that is his first shift. When he sees his mate for the first time, the man is not only in chains but feral – a shifter gone mad, who’s past redemption. Devastated, Brendan can’t think beyond staying close to the mate he can never had. That is until he does something dangerously shocking that just might bring his mate back… but at what cost to himself?

I loved that this book dealt with a feral shifter and I especially liked that we got to see Brendan find his mate. In the previous book, Brendan intrigued me because he was so timid and shy. He was more likely to blend in with the crowd than do anything that made others notice him. In this book, however, he’s changed… become more aggressive, angry and wild. A lot of that has to do with Ripley, who is just as aggressive and wild. But where Ripley is an alpha and expected to be hostile, Brendan is an omega who isn’t supposed to have those characteristics so it was interesting to see the struggle of both Ripley and Brendan dealing with the after effects of feral blood.

As with the previous book, my biggest issue was that this one isn’t very long. There were so many elements and possible side plots thrown into the story but not nearly enough time to explore it all. I would have liked to understand why and how Dalton shifted so fast or why exactly Rayce is not willing to accept Peyton. I’m sure we’ll understand one their stories are read but it would be nice to get a little more clarification on simple observations that, as of right now, seem unnecessary. Beyond that, I didn’t really feel any connection between Brendan and Ripley. Their bond is there but I would have loved to actually get to experience the ‘getting to know each other’ parts that were more or less glossed over.

In the end, this was still an enjoyable story. I like the setting and the differences between shifters, ferals and hellhounds. It’ll be interesting to see what comes next in this series. If you’re looking for something quick that’s sweet but has a little edge to it, definitely pick this one up!