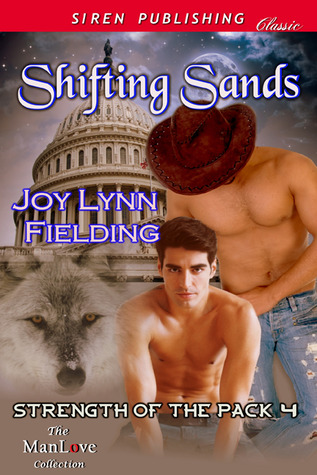 Blurb: The visit to Elk Ridge is supposed to be just another assignment for Tom Barrington. Then he encounters Bryce Reynolds, a generous, warmhearted cowboy who has the easiest smile he’s ever seen. It doesn’t take long for Tom to break all his rules and end up in Bryce’s bed.

Bryce Reynolds believes there’s no such thing as a hot politician, right up until he meets Tom Barrington. Tall, dark, and principled, Tom overturns all of Bryce’s prejudices, and Bryce starts to forget that he doesn’t do serious and he doesn’t do commitment.

As Bryce and Tom struggle to make sense of what’s happening between them, they’re drawn into a political battle—one which could affect the future of every shifter. And when long-buried secrets start coming to light, things turn deadly. Nothing will ever be the same again for the Elk Ridge pack.

After it’s verified that an Argent lives at the Elk Ridge pack, Tom Barrington is sent there by one of the council members to smooth the way for the upcoming council meeting. There he meets Bryce, the pack’s beta. Where Tom is polished and professional, Bryce is flirty and charming. It isn’t long before their work relationship turns into more and after a few hot bouts of sex, they discover they’re mates. Unfortunately, Bryce doesn’t do relationships and he sure doesn’t want to be tied down with a mate, which breaks Tom’s heart. But Tom still has a job to do and when Matt tells Tom of what happened to Cale’s pack it unknowingly puts him in a dangerous situation that proves deadly.

Okay, I’m going to admit it. Up until now, Bryce wasn’t exactly my favorite character. I just found his sluttiness and flirting a little off-putting even though he’s the heart of the Elk Ridge pack. He’s easy going and likeable but I just never felt a connection with him in the previous books. This book, however, changed that opinion. Even though he’s sworn never to have a mate, he’s depressed that all his pack members are pairing up and feels lonely. I felt bad for him because he kept associating the word ‘mate’ with blind love. Yes, this book is insta-love but, IMO, you can have a mate and not actually love them.

When Bryce meets Tom, he’s immediately attracted to not only Tom’s body but his intelligence and confidence. Unfortunately, that confidence is only skin deep after Tom recently broke up with his ex and learned that he’s boring and pretty much a waste of space. Still, I loved that Tom had a mix of strength and vulnerability. He falls for Bryce’s charms and sex appeal but when it came down to putting up with Bryce’s behavior or walking away, he chose his dignity over begging for attention from a mate that didn’t want him and I LOVED that.

As with the other books in this series, my biggest issue was that there was a little too much smut for my tastes. A completely personal preference and even with that I still enjoyed the story. Beyond that, there were a few questions that were never answered. They were thought about and I guess, depending on your perception, the answers would be ‘implied’ but I found I didn’t exactly feel as satisfied with some implied answers such as who actually ordered the massacre of Jesse’s old pack.

In the end, I still really enjoyed this one. I’m adoring this series and I love that each member is getting their own story. With each book, more of the problems about how to handle the Argent situation is addressed and I’m really liking the way this arc is unfolding. I can’t wait to read what’s next!