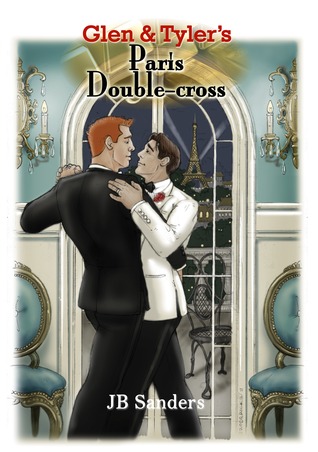 Blurb: Glen and Tyler are young, in love, and the wealthiest human beings on the planet.  But when Glen’s brother calls from a jail in Paris, you guessed it, they’re off to France to tangle with spies, neo-Nazis, evil world-spanning conspiracies and French gangsters. Plus they have a romantic dinner, and find long-lost treasure. Really, it’s a fun-filled non-stop romp.

In this third installment of the Glen & Tyler series, we meet up with our heroes a couple of years after their Scottish Troubles, a little more world-weary, a little wiser and no less sarcastic.

In this third installment of Glen & Tyler, the boys head to Paris when Glen receive a call from his brother, Lance, that he’s been arrested. Lance being framed for art theft is just the tip of the iceberg when Glen and Tyler are once again thrust into conspiracies and plots of their demise. Fortunately for them, Tyler has just the plan to beat their new enemies. With neo-nazies and French gangsters nipping at their heels, can Glen and Tyler still manage to enjoy a little romance in the City of Love?

This addition to the Glen and Tyler adventures is by far my favorite. Glen is still his amazingly hot self (redheads, how can you NOT love them?!) and Tyler is still out to impress Glen in anyway he can. At this point, they’ve been married for a few years now but still seem to hold their ‘just married’ bliss because at the heart of their relationship is a true friendship. I love that about them and the fact that they can banter at the most inconvenient of times. However, for them, it’s a way to relieve stressful situations. Still, as a couple they fit well because they know just what they should do when the other is reaching their breaking point. I love these boys but I also liked that this book showed more of an attempt at romance. In previous books, I felt the connection between them but didn’t see it as much as I would have liked (beyond their flirting but they flirt with everyone) so it was nice to see Tyler actually making an effort to woo Glen in Paris. They’re so sweet together but also very funny so it was great to see little pockets of them enjoying their time together in Paris.

My biggest problem in previous books was that the stories were always chaotic and all over the place. Thankfully, this book felt more organized and on track of what problem they’re forced into. There were a few parts that still confused me but they weren’t as numerous as in the first two books. Beyond that, my only big issue was that I felt uncomfortable with the ‘seduction’ in this book. I’m well aware that Tyler and Glen are bi-sexual and I’ve accepted that because they’re very much in love… but, in this book, I was uncomfortably aware of the fact that it is very possible for them to cheat because of how close Tyler actually came to doing so. I loved that there was more romance in this one but there also felt like more attention towards identifying gorgeous and attractive men and women. This is just a personal preference but even when characters are so in love, I don’t want to be told whenever a beautiful man or woman walks by and because of Tyler letting himself get dangerously close to being seduced, I now can’t get out of my head that if Tyler can get ‘almost’ seduced now, what’s to stop him from actually being seduced later when Glen isn’t around? After all, if Tyler hadn’t have seen Glen right when he did, he would have gone all for the lovely flesh that was so tempting without any hesitation.

In the end, though, I still love Tyler and Glen. This novel was still the fun, fast-paced story of how the two of them best their enemies and it was much easier to follow along. I’m looking forward to reading more of them in future stories, although I really do hope their attentiveness towards others’ attractiveness lessens because I’d rather not be reminded of that… but as I said, that’s just a personal preference 😉