Book Review: Caged: Love and Treachery on the High Seas by Bey Deckard 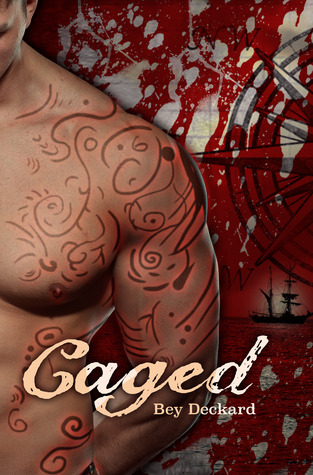 Blurb: . Sheltered and lonely, Jon’s life changes drastically when a strange ship sails into the harbour of his small port town one day. Trapped between the possessive pirate captain and his murderous first mate, he must learn to adapt or he will lose himself completely. An epic tale of love, treachery and revelation, this first installment of the Baal’s Heart trilogy brings you into the lives of three men so bound together by jealousy and lies that they must sail to the very ends of the earth to find forgiveness.

Deckard’s first novel is a masterful portrayal of sorrow, hope, and passion, with a narrative that twists the reader through a world set in the Golden Age of Piracy. A thrilling look into the darker side of human nature, Caged effortlessly melds serious historical fantasy with five star erotica.

Wow, where to start with this one. This called to me right away, from the cover and the blurb, it just sounded like my kind of story, and I wasn’t disappointed. It is everything that the blurb leads you to believe and then some.

It starts out with poor Jon, who already is suffering because of his life and the horrible migraines he has been getting. Then, he is taken captive by a pirate captain, Baltsaros, who is already in a sort of “relationship” with his first mate, Tom. They basically have a d/s thing going on with Tom in the role of the masochistic sub. Things get pretty harsh between them, but there is such depth to each character. Tom is pretty ruthless, but I loved him from the start. He’s cheeky and mischievous even when he’s being used and abused and asking for more.

Baltsaros, even though he cares for Tom, cannot help but be drawn to Jon. He helps bring him back to good health and they form a sort of bond that is totally different from the one Baltsaros shares with Tom, which puts a lot of strain on their relationship leading to much of the treachery part of this story.

Jon is a sweet soul. He has had very little pleasantness in his life, with little to no physical contact or nurturing to this point, which seems to fascinate and draw Baltsaros to him. As he gains strength and finds his way and position among the crew, he grows so much and is, by no means, a doormat. He doesn’t take much crap from Baltsaros, which I loved.

This remains a fairly high tensioned love triangle throughout most of this story with various circumstances keeping it that way. I really loved all the characters here and was feeling for them at various times right until the end. There is so much to this story, but it moves along at a nice steady pace that I never felt as though I wanted it to move faster or end anytime soon. When everything came together in the end with Baltsaros, Jon and Tom, I was disappointed it was over, but it left me eager to read the next installment of this fabulous story. These three guys provide something different to each other that makes them a perfect fit, and I’m really excited to see where things go next.

There is one aspect that never seemed to be really addressed, and I kept waiting for it to come to light or be an issue. I’m hoping to get some answers as the story continues.

I’m always excited to see something like this from a new author, and for a first novel, this was a very good start. It is well written, very nicely fleshed out and quite engaging. I’m really looking forward to more of Bey’s work in the future if this is any indication.

3 thoughts on “Book Review: Caged: Love and Treachery on the High Seas by Bey Deckard”