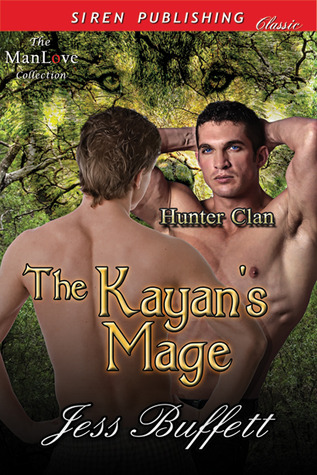 Blurb: Sawyer McLeod lost his family and his entire Guild, except his twin, seven years ago. Now almost twenty-one, he is coming to the age to receive his abilities as a Mage. Unfortunately there are others who will stop at nothing to see the brothers don’t survive that long.

When Jake Hunter, Kayan for a Clan of Wolf Shifters living in Australia, finally finds his true-mate, he doesn’t expect it to be in the midst of a brutal attack. Through omissions of truth, misunderstandings, and fear, Jake struggles to prove to Sawyer that he can trust him.

When Sawyer is finally willing to give Jake a chance, a ghost from the past returns to destroy everything they have built together. Will they be able to overcome the foe long thought gone, or will it be the end for the Kayan’s Mage?

When Sawyer and his twin brother, Riley, are cornered by a group of drunks who somehow seem to know they’re not human, they’re almost positive they’re about to die. Help comes in the form of Jake and his buddies, who are on their way for a night out when they see what is happening to Sawyer and discover that Sawyer is Jake’s mate. Unfortunately, while Sawyer recognizes that Jake is his mate and trusts him to a point, he’s still afraid of what could happen to him and his brother if knowledge of the twins being Mages gets out. But more than that, the twins are still in danger. Can Jake keep his clan and his mate safe when this danger comes at an unexpected time?

I must say, I’m pleasantly surprised with this story. I was expecting to read a cute shifter book but instead found a world filled with not only wolves and vampires but Mages, as well. These Mages are so powerful that they’re feared by the other races. I loved that it wasn’t wolves or vampires that were the most deadly but the Mages instead. Beyond that, the characters are great. Jake is, of course, the fierce, protective alpha (or Kayan in this case) while Sawyer is his, feisty mate. They’re adorable together and had a lot of bumps to work through before they could really settle in their relationship. The fact that this story has its own language besides the typical alpha, beta, etc. was refreshing. I love it when authors bring in other elements besides just having shifters in their stories. It separates the book from being just another shifter story, IMO.

I only had two big niggles with this one. One, the parts I really wanted to be shown were told instead. Such as when Jake and Sawyer would take their long walks together and just talk. I would have really loved to experience those chats instead of just being told that they took walks. I think because we missed out on that, it left the whole Mage aspect completely unknown when it came to understanding them, how they came into existence, and really, just learning about Mages in general. Beyond that, there was too much sex for my tastes for the length of the story.

In the end, though, this was an intriguing tale that has a unique aspect to it. Whereas it may hold shifters, the author does a great job of differentiating this series from other typical shifter stories by incorporating Mages and also changing the lingo in which the Wolves, Vampires and Mages go by, which was very refreshing. I’m looking forward to continuing the series and seeing where it goes!