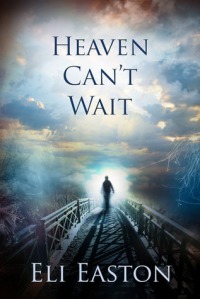 Blurb: When Brian Matheson dies at nineteen, his soul is in limbo. He has one chance to redeem himself before he’s thrown into a nasty pit. All Brian has to do is save the life of Kevin Anderson, a boy he and his friends tormented for being gay.

Kevin thought he’d finally escaped bullying. But his college roommate, Chuck, and his homophobic pals, prove him wrong. Now he can only wait for another room to open up—and try to keep his eyes off sexy, uber-straight Chuck.

Chuck is struggling to keep up the tough-guy façade everyone expects, but being trapped in a dorm room with the prettiest twink he’s ever seen isn’t helping him keep his feelings hidden.

If Brian can untangle this mess, he’ll deserve his wings.

God, this story! You’d think by now I’d know what to expect from Eli Easton’s short stories but nooooooooo I still fall for them and then I’m left a blubbering mess that can’t stop smiling. *sigh* Oh, the tortures of reading a good book!

This one is a bit different than the usual story because it’s told a majority through Brian’s POV. Having just died, Brian has one chance to save himself from Hell. All he has to do is one thing: save Kevin’s life, who’s Brian’s friend Chuck’s roommate. Unfortunately, that’s easier said than done when Kevin’s constantly being bullied and tired of how horrible his life is. Not to mention, Brian’s trying to help his friend Chuck. But through his meddling, Brian slowly starts to realize that the very people he’s trying to help… might just be better off together.

This was SUCH a sweet story! OMG, I loved it so much, that I think I literally devoured it! Brian at first is arrogant, cocky and homophobic but as the story progresses, he realizes that he’s been a pretty shitty person. Kevin just about broke my heart. He hates his life, his school and everyone at it. Chuck is the classical closeted guy who is quiet for fear that his secret would be discovered. Kevin and Chuck together are sad but sweet. They’re so hesitant and scared of what they’re doing that they’re fumbling was just too cute. I loved them together and I loved the fact that with everything Brian went through, he became accepting of seeing his best friend finally come out.

My only problem is now I want to know what happens next! Yes, Chuck and Kevin FINALLY get together; Chuck accepts being gay and Kevin gets to be accepted like he always wanted… but what now? The way the story is written, the ending is focused on Brian and what happens next for him…. but what about Chuck and Kevin? How does Chuck’s friends take him dating Kevin? Or are they keeping their relationship private? I WANNA KNOW WHAT HAPPENS NEXT!

All in all, this was a fantastic story. It has a combination of many elements: humor, sweet moments, heartbreaking moments; it also deals with things like bullying, coming out, acceptance and suicide and for being a short story, there was a good balance between all that and the characters – Chuck, Kevin and Brian. If you’re looking for something that’ll simultaneously touch you and make you smile, give this one a try because it definitely affected me! But, DAMNIT! Now I want a sequel! One with Brian in his new life! GIMME THAT BOOK!