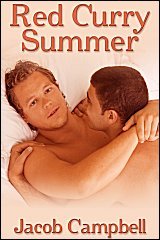 Blurb:  Joey Melancon is a young social worker at a mental health center. His days are clinical routine and his weekends are monotonous — a bottle of scotch and boring sex with a dumpy co-worker. He’s desperately lonely and wants real love in his life.

Curry Deigrepont is a hot redhead doing a summer internship at the mental health center where Joey works. Curry kicks things off by leaving a note for Joey which invites lots of sexual curiosity. When they hook up, Joey begins to hope for a future together, but Curry has other plans.

Can what they have found together turn into lasting love? Or will their red hot summer fizzle out when Curry’s internship ends?

Review: This is the story of Joey, a young gay man who is interning at a mental health clinic in the early 70’s. It is his story about finding his way in a gay world, finding what he believed was true love, even though it was unrequited, and looking back on how that “relationship” has remained a strong memory even some 40 years later.

Joey is a guy who seems to be looking for a more meaningful relationship and believes he has found that with Curry. Unfortunately, Curry is not on the same page and has his own life planned out which does not include having anything more than sex with Joey. Pretty much as soon as Joey professes his feelings, Curry hits the brakes.

This takes place at a time I don’t generally enjoy reading about. I was never a fan of the 70’s, or the 80’s for that matter, with those decades making up the early stages of my life. However, this is an interesting little tale showing what things were like then for gay men. One of the more common aspects of that time was men remaining deeply closeted and having families, only satisfying themselves with other men on the side. The descriptions and actions (with the drug use and music) really set the tone and had me feeling like I was living in a flashback to those times.

My only real issue, and it was only a small one, was that the sentences often felt short and choppy. Some times, this occurred in the dialog as well, but that might have been my own issue. I tried to put myself into that time period to read it a little differently, which seemed to work (even though I realize it wasn’t that long ago in the grand scheme of things).

This definitely reads like an actual recounting of a memory, and thus, has an overall mature feel to it. I absolutely loved the eiplogue, which really wrapped things up and solidified that memory feeling even more. I really enjoyed this short story, though I’ve read some of Mr. Campbell’s longer works and loved them as well. I’m definitely looking forward to his next offering.