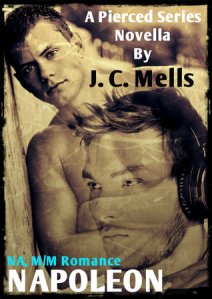 Blurb: This is a stand-alone book in the series and the first 4 books do not need to be read to enjoy this one.

Napoleon Charming-Balak has been crushing on the “exchange student” that’s been staying with him for the last six months. The object of his crush: Sixten Dahl, a straight boy that seems to get his kicks from flirting with, then torturing, Napoleon in the cruelest of ways. Is it any wonder Nap, and his best friend Moused, are high-tailing it to New York City as fast as they possibly can? If there’s one thing Napoleon is hoping for, it’s that life in the Big Apple will be exactly what his self-esteem needs to get over the Swedish tease that has been tormenting him all summer long.

If he could only stop thinking about Sixten long enough to enjoy it.

All summer long, Napoleon’s been teased by a gorgeous Swedish boy named Sixten who just so happens to be straight. Now, Napoleon has the chance to finally get over Sixten when he goes off to college in New York with his best friend, Moused. Unfortunately, Napoleon’s hopes of leaving all thoughts of Sixten behind are far from possible when Sixten ends up not only going to school in New York but also staying in the same house!

This was a very cute story. I absolutely loved Napoleon’s voice and his inability to get Sixten out of his head. As a character, Napoleon is feisty and vibrant. He refuses to be anyone but himself and proud of it. He’s totally hung up on Sixten and it was fun to see how the two circled around each other. Sixten is a little bit of an enigma, though. He’s cocky and beautiful but we don’t get much of his personality besides his constant teasing of Napoleon. Still, I really liked when they were together because there was always a bit of bantering or some intensity between them.

I think my biggest issue with this book is that I felt like I was missing something while reading it. It’s marketed as a standalone story in the Pierced series but, in reality, unless you want to be a bit confused at times, it would be best to read the previous books in the series first. It’s not anything huge but I was always wondering what Napoleon was talking about or thinking that there was something the reader should have already known but that wasn’t mentioned in this particular book.

So, for me, the beginning was a bit hard to read through because the reader is just dropped into a world that they’re supposed to already know. Beyond that, the first half of the story is a little jarring because it’s in the present but Napoleon keeps going back into the past to explain the situation with Sixten. Plus, that ending! I wanted to know what happened next, how does Lucas, Pierce, and Sixten’s parents take their news? It just ends without us knowing, which was a tad frustrating and makes me wonder if their reaction is in another book.

Overall, I still enjoyed the novella. Napoleon is a fun character and I liked the push and pull from Sixten and the confusion it causes both Sixten and Napoleon. I wish the story had been a bit longer because I would have loved to see everyone’s reaction to Sixten and Napoleon and I wish I had read the previous books first, but it was still a very enjoyable, quick read. Definitely recommended if you’re looking for a contemporary with just a dash of paranormal.