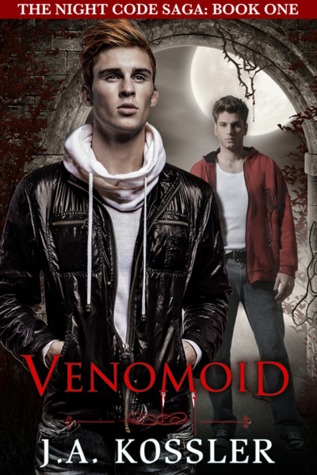 On one intense dragon-hunting mission, Lorin encounters Lex, a handsome but flesh-eating paranormal who is quickly intrigued by the young vampire. Lorin fears this hunter, but as an unexpected friendship unfolds between the two, an even more unlikely romance blossoms. The problem is Lex is on the IPO’s radar, and when they capture him for scientific experimentation, Lorin must risk his life to overthrow the organization he’s always feared in order to save his love.

As a seventeen year old vampire, Lorin has spent the last seven years training at the hands of the IPO, a secret police that makes sure paranormals abide by paranormal law. Now one of the IPO’s best operatives, Lorin is irreplaceable and extremely loyal to the very humans who hate him. But when he goes on a mission and encounters, Lex, an intriguing flesh-eating creature, Lorin’s views on everything start to change including the way his emotions fluctuate around the other paranormal. Now he’s questioning the IPO’s motives and their torture of innocent paranormals. When two of Lorin’s missions end in massacre, the IPO is quick to blame Lorin and his only hope of survival is Lex. Can Lex get Lorin out of the IPO’s clutches and if he does, will they be able to stop not only the IPO but also the creature killing so many operatives?

This book was nothing like I expected it to be! I was drawn in right from the start. Lorin is very young and naive and that shows from the beginning. All he knows is life as the IPO’s pet and the friendship of another operative, Jud. He’s unfamiliar with anything that doesn’t have to do with tracking down and capturing other paranormals. I loved that he was so innocent and that it was hard for him to understand how he felt around Lex. At the same time, I adored Lex. He’s so cocky and smug, which made his teasing of Lorin very amusing. He also falls very deeply for Lorin and has more loyal to Lorin than his own family, which I found admiring and really, really loved. Together they’re a sweet couple and they definitely kick some ass. They have a very flirtatious relationship filled with sweet touches and teasing comments. They’re just adorable.

I only have two big complaints with this one. First, there were a lot of editing errors to the point that I kept being pulled out of the story. There were constant typos when it came to a certain character’s name (Judd instead of Jud) and even missing words at times so the sentences sounded awkward or incomplete. Second, there was a lot of teenage angst in this one. Constantly Lorin would go from raging confidence to being depressed and insecure within five seconds. The first few times this happened, I understood it but after a while, it grew tiresome to see Lorin become insecure at the simplest of words. Not to mention that Lex and Lorin ‘loved’ each other as soon as they saw one another so their constant ‘I love yous’ made it seem like their ‘love’ was forced and not natural. And this is only an observation but how old is Lex? It’s never mentioned but Lorin is seventeen, is Lex around that age, too?

Overall, this was still a good book. At times, it felt like it could have been a movie. It’s filled with some gruesome moments but also has some action and suspense. Plus, there’s a sweet little romance between Lex and Lorin with just a hint of a Romeo and Juliet feel to it (two people who could never be together no matter what but are drawn to each other anyway). It also has an interesting storyline, I liked the differentiation between the vampires and zombies and the chaos that the IPO causes. I’m definitely looking forward to the sequel because it’ll be interesting to see where the author takes the story next. Will it be about Lorin and Lex? Or will there be other gay men that get their own story? Can’t wait to find out!