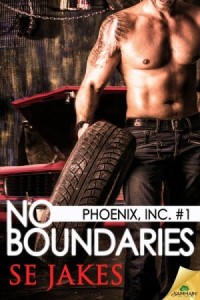 Blurb:  When your past closes in, running isn’t always an option

The jobs Marcus Lowry works for at Phoenix, Inc. Investigations are quick and easy, and they don’t give him the nightmares his days as a CIA operative did. That is, until he gets involved in a case that grabs him by the throat and won’t let go.

Cole Jacobs left behind his old life on the streets to make a name for himself rebuilding high-end and vintage cars and bikes. But when a stalker threatens to kill him—and to hurt anyone who stands in his way—his past closes in on him, and he’s not sure where to turn.

The last thing Marcus wants to do is take on a charity case, and to say that he and Cole don’t see eye to eye at first is putting things mildly. But when the first attempt on Cole’s life nearly kills them both, Marcus realizes that Cole is in real danger, and Cole is forced to reveal everything. Almost everything. Because Cole’s deepest secrets could destroy them both.

Review: What a pleasant surprise it was to see that Styx, Law and Paulo are back! They are the men behind Phoenix, Inc. I enjoyed their story in the Men of Honor series and had not realized this was a spin off of that. They’re still having some issues, but not where their relationship is concerned, which was really nice to see. I enjoyed seeing how they are getting along.

Styx comes across Cole, a guy trying to make a new life for himself. When he notices Cole is having issues with a stalker, he offers his (and Phoenix, Inc.’s) services to help. Marcus, a former CIA operative, is an employee at Phoenix, Inc. and is a man with a few issues of his own. Styx sees it as the perfect opportunity to help out Marcus and puts him on the case.

Marcus and Cole basically go into hiding after it appears the stalker believes the two are more connected relationship-wise. They butt heads a bit, but slowly, they begin to trust one another, for a while at least. Secrets come out that get in the way of their budding relationship, tensions are high, and the action heats up.

Poor Cole is frightened, feeling bad about accepting the help of the others and essentially putting them in danger. He is unable to pay them which doesn’t help his guilt issues. The Phoenix guys, with the exception of Styx, are all a bit wary of Cole and his intentions. Law is dealing with his own memories and issues as his background is somewhat similar to Cole’s. But his guys are by his side the whole time to help him through.

It always feels like a breath of fresh air when I pick up a new Jakes book, and this one was no different. Everything I come to expect is present here, from the solid characters, to the steamy scenes, and everything in between. This was a great start to a promising new series.

One thought on “Early Book Review: No Boundaries by S.E. Jakes”