Book Review: Duty to the Crown by Rebecca Cohen 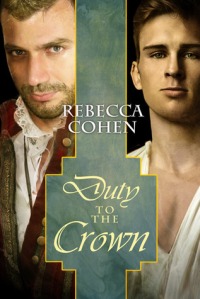 Blurb: Despite the uncomfortable clothing and the gossip at court, Sebastian Hewel is still enjoying the role of Lady Bronwyn, wife of Earl Anthony Crofton. But when Queen Elizabeth asks a favor of Anthony, Sebastian’s world fractures and his heart threatens to break. The Queen wants Anthony to seduce Marie Valois, the beautiful daughter of a French noble, to discover the whereabouts of her father, who is wanted by the King of France.

Sebastian knows Anthony can’t refuse the Queen, especially since he has something of a reputation at court. But the situation is further complicated when Marie meets Sebastian without his disguise—and starts flirting with him. Her brother, Nicholas, arrives at Crofton Hall, not happy that his sister has been linked to a man like Anthony, only to find his own head turned by Lady Bronwyn and her acerbic wit. Contending with the attentions of both siblings—and a very jealous Anthony—would be bad enough. But then Sebastian’s uncle demands Sebastian and Anthony stage Bronwyn’s death to avoid discovery….

A Timeless Dreams title: While reaction to same-sex relationships throughout time and across cultures has not always been positive, these stories celebrate M/M love in a manner that may address, minimize, or ignore historical stigma.

OhMyGod!  This series is so much fun!  I absolutely love Sebastian and Anthony even though I want to strangle them both most of the time!!

Don’t forget: The Actor and the Earl must first be read in order to appreciate Duty to the Crown.

Sebastian has been pretending to be Bronwyn, the wife of Anthony (Lord Crofton), for over year and things get a little sticky when Sebastian finds himself being pursued by TWO siblings at the same time.  Ha!  I loved the whole spin on this since Anthony was originally meant to be the pursuer of the young lady, and Sebastian had to suffer with his jealousy while Anthony flirted with other woman.  But when the tables turned and Sebastian AND “Bronwyn” was fending off advances, I was dying with laughter at Anthony’s jealousy and Sebastian’s discomfort!  Anthony finally got a taste of his own treatment and I loved every minute of it.

The whole plot with the “duty” to the Queen was a bit outrageous, but I think you have to go into this series being completely open to the ridiculousness of it.  I mean, Sebastian is pretending to be a woman 75% of the time and NO ONE has figured it out!

Sebastian and Anthony are just as yummy as ever.  Maybe even more so since they are obviously in love and have eyes for no other.  The dancing scene was totally intense!  But one of my favorite scenes was when Anthony got frisky with Sebastian at court.  OhMyHotness!  Plus, I can’t get enough of their playful banter and squabbles.

I was a bit disappointed in the beginning that this book wasn’t told from Anthony’s POV.  I at first thought that would have been a refreshing change to the series, but in the end, I agree that the happenings of this story was best told from Sebastian’s POV.  I’m still holding out hope that I will eventually be gifted with something from Anthony. 🙂

I will be starting Forever Hold His Peace as soon as possible!  I NEED more Sebastian and Anthony and can’t wait to see if they finally decide to get rid of “Bronwyn”.  I don’t want her to go anywhere!