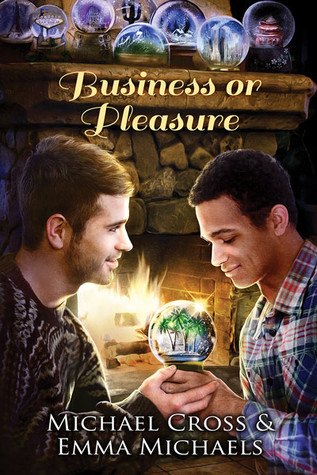 Blurb: When American Ian lands a secretarial job in the United Kingdom, he thinks he’s set for life. Admittedly, he’s still a bachelor living in a small apartment and working for a complete jackass, but other than that, his life is everything he ever hoped for in an enticing city full of beautiful people. When Alistair Security is robbed during the Christmas Fundraiser, the last thing Ian expects is to end up locked in with his boss, Alex Alistair, and to realize he might have mistaken his resentment for something else. The two men find common ground throughout the night, but when morning comes and the news hits the headlines, their connection will be tested. Ian might find himself at the start of a hot office romance—or he’ll spend the holidays browsing the classifieds.

During the yearly Christmas party, Ian somehow manages to get locked up with his egotistical and asshole of a boss. Forced in close quarters while they’re being robbed, Ian and Alex have to figure out a way to get out of there before they kill each other. But when they’re escape leads to things Ian never wanted to even hope for, will it change their relationship for the better or worse?

I’m not sure how I feel about this one because I liked some aspects of it but others I didn’t really enjoy. As a character, I loved Ian because he was so confident and fierce but I also liked the way he could banter so easily with his boss. I also really loved the ending, it was just so sweet!

At the same time, my biggest issue was with Ian’s boss, Alex. I didn’t really like him. For one, he cheats on his fiance so much that no one even things it’s bad but he’s so far in the closet, he can’t see the door anymore. But also, I didn’t like the way he hated Ian one moment and then was so in love with him the next. Add to that, I didn’t understand the need for the POV by the fiance, it felt out of place and awkward.

Overall, this one had a lot of potential but the length made it hard for Alex to redeem himself as a character. Plus, I didn’t understand the whole reason they were taken hostage or what the point of it was especially when it seemed so easy for them to escape at the end.