Book Review: Quite A Spectacle by Meg Harding 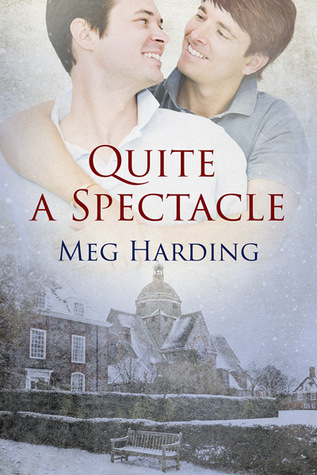 Blurb: Max moved away from his family to be with Michael, and his family never got over it. Now, for the first time in almost a decade, he’s going to return to London for the Christmas celebrations. He’s confident his family will welcome Michael with open, loving arms. At least that’s what he tells himself.

Michael doesn’t have his head buried in the sand. He knows he has a lot to prove this Christmas, and he’s not sure if he’s up to the task. All these years and he’d never considered having to spend a holiday with Max’s family. Now that it’s happening he’s not scared to admit it—he’s terrified.

It’s been eight years and Max’s parents still haven’t forgiven Michael for taking their boy across the Atlantic. Now back in London for Christmas, Max is confident Michael will be accepted but Michael knows it won’t be that easy, not when every time he’s around Max’s family, he always ends up making a spectacle of himself. Can Michael survive the holiday with Max’s parents or will the tension between them escalate into something much bigger?

This was such a sweet story! I loved that every time Michael would meet Max’s dad, he would always do something embarrassing or horrifying like crashing the man’s car or puking in it. As a couple, I loved that Michael and Max were still so in love after so many years and that they had no issues with showing that love in front of the parents that didn’t really approve of Michael.

I enjoyed this one but, like with all the other stories in this Advent Calendar, I wanted it to be longer and just have MORE of it. I liked that Max’s family warmed up to Michael eventually but I would have liked to explore more of why there was such tension between the parents and Michael.

In the end, a very cute story. I liked that Michael and Max have been together for years and how Michael finally stuck up for himself against Max’s parents. I would have liked the story to be longer, but as it is, it’s a sweet tale that’s definitely worth the read with a ton of holiday cheer 🙂