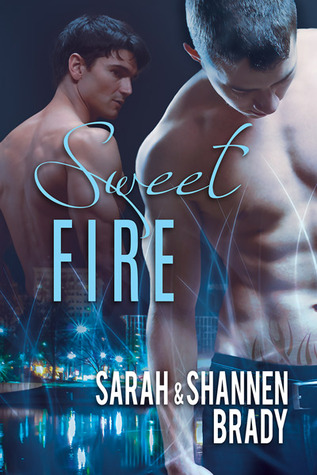 Blurb: Between Homeland Security’s Gifted Agenda and the bigotry of a fearful populace, having paranormal Gifts is a dangerous thing. Pyrokinetic Aaron Flores knows firsthand how difficult it can be to control his power. Still, he runs his bakery and never gives up on finding his Happily Ever After. When Aaron’s cousin asks him to check on her former EMT partner, Aaron’s chance has finally arrived. He’s determined not to let anything stop him from catching (and keeping) his man.

Ramón Del Rio spent three days at the tender mercies of HOMSEC agents when his former partner was taken. He wants nothing to do with a Gifted guy, but Aaron is nothing if not persistent. He’s a pastry chef, after all, and the way to a man’s heart really is through his stomach. The physical passion they share is the icing on the cake. Just when Ramón decides that having Gifts might not be a deal breaker, someone close to Aaron decides his fire needs to be put out—permanently. Ramón will have to face his fears to save them both.

When Aaron’s cousin asks him to check up on her former EMT partner, Aaron meets the man who could give him his happily ever after. But while Ramón Del Rio is more than attracted to Aaron, he doesn’t know if he can handle the consequences being around another Gifted could bring him. Del’s attraction to Aaron, though, means he can’t stay away, especially when Aaron pushes himself into Del’s life. Del has to make a choice: give in to Aaron’s advances even with the risk of HOMSEC or give up his chance of being happy.

When I read this blurb, I was very intrigued with it. I’m always interested when it comes to a world where people have supernatural abilities and there’s a secret governmental agency out there trying to annihilate them. So, I was eager to start this one and, in the end, I liked it. Del was my favorite character. I loved the struggle he had with wanting to be with Aaron and the risks being with him would mean.

I had a lot of issues with this one, though. Mainly, I didn’t really like the MC, Aaron. For some reason, he rubbed me the wrong way and I can’t exactly pinpoint WHY that was, just that I didn’t really care for him and his drama. Beyond that, even though DSP didn’t disclose this, the book is technically book two in a series (book one, Healer, is M/F). That becomes glaringly obvious in the beginning and because I wasn’t aware of this until after I finished the book, I always felt like there was something I was missing especially since events from Healer were constantly mentioned. Aside from that, there was way too much sex for my tastes and I also knew who the ‘villain’ was from the get go. It was pretty obvious to me and it seemed like the only person who didn’t have a clue was Aaron.

In the end, I liked parts of the book, especially Del as a character, but I had way too many other issues with the story to really enjoy it as much as I could have. I think if it had been disclosed that it was book 2 in a series, I could have enjoyed it more after I read the first book but I didn’t really like Aaron as a character to begin with. Although, the premise of the story was very intriguing and I wouldn’t mind learning more about other Gifted individuals.