Book Review: Made to be Broken: Abomination by A.M. Snead 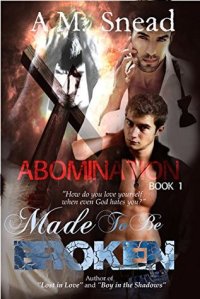 Blurb: Having grown up in a conservative Christian home and under the cruel hand of an abusive, fanatic father, Noble Richman is unable to accept who he is. Desperately seeking to be “healed” of his same-sex-attractions, Noble drowns in shame and guilt whenever his mind strays to other men. But after meeting Rebecca Harrington, Noble is convinced his prayers have been answered and he is ‘healed’. Engaged and ready to move forward with a woman he has convinced himself he is in love with, all of Noble’s plans – and certainties about himself – are suddenly derailed when he meets Rebecca’s step-brother, Jonah, and he begins to tumble down a slippery slope of forbidden desires and passions – emotions and feelings that the violent hand of his father has taught him are an abomination.

Review: Harsh, Harsh, Harsh. This story was so incredibly sad, heartbreaking, and very difficult for me to read. The self-hatred, condemnation, and fear that filled Noble’s heart was so over-the-top that I almost had to put the book down. I know this is book one and things aren’t expected to be settled so easily, but I’ve never read a book that was so completely filled to the rim with the kind of mental anguish that consumed poor Noble.

Noble was raised by a bigoted, abusive, “Christian” father who beat the gay out of him as a young boy. He was so traumatized that he began to believe he was actually healed when he met and fell in love with Rebecca. Until he meets her step-brother Jonah and Nobles’ well made plans just crumbled. The constant tears were a bit annoying, but the feelings that consumed Noble were palpable to the reader. Jonah can’t help but try to force Noble out of his closet because 1) no man should deny who he is, and 2) his step-sister is a bigoted, hate filled harpy who deserves to be brought down a peg, or six.

Jonah and his dad, Mason, are really great characters, but I had a hard time watching Mason stay silent when Rebecca totally dissed his son. She has every right to create the wedding of her dreams, but not at the expense of her family. I really didn’t like her at all, and I can’t wait to read on to see how she reacts to the fact that she’s been dating and now engaged to a gay man. I know that’s not very nice, but she is the complete and total opposite of nice and deserves everything she gets.

I did have an issue with the prologue that I am hoping is made clear in the next book, or at least before the series ends. I am thinking the one boy was Jonah, but it is not made completely clear, and I would really like to know. At first, I thought it was Noble, but knowing that Mason was so cool with his son’s sexuality, I was left believing it was Jonah. We shall see…hopefully.

This installment ends with very little settled, and I was glad that I already had the next book lined up. I’ve read this author before, so I know that I will have a lot more to overcome before the boys finally get their happy ending…and I know it will probably not be until the end of the last book, but that’s okay. I’m ready. I think. I hope.