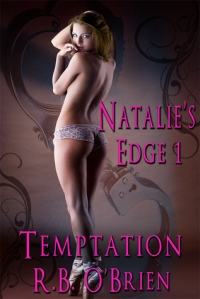 Blurb:  He didn’t think he was capable of love; she thought she had everything she ever needed. But when former ballet dancer and entrepreneur Natalie Smith and environmentalist Michael Black meet, they are thrust into a headlong relationship that may devastate them both.

Falling almost too fast for this enigmatic, controlling man, Natalie is both excited and terrified by the fine line Michael walks between his dark and light side, as he introduces her to a world of games, bondage, and punishments. And to her surprise, she likes her submission. She likes the control he wields. And he cannot have it any other way. He likes to bring Natalie to the edge, and she likes the edge he brings her to. Pleasure has never felt so good.

But can Michael fully let go of his trust issues and fall in love? Or will his past leave Natalie on the edge of pain?

Review:  Unfortunately, it seems I am in the minority on this one. I’ll try to explain why.

The story: The story itself was ok. I was interested in reading a m/f story with a sexy alpha male and strong female character. Things heat up very quickly for Natalie and Michael when they meet in the elevator of their building. Michael is very mysterious and uses his charms to lure Natalie in. It works, and she is craving everything Michael in short order. Well, almost everything, but she doesn’t put up much of a fight against the things she doesn’t like.

The characters: Here is where I had the most trouble. I really didn’t like Michael all that much. There were times when he was super sexy, spewing sexual tension like a sprinkler on high speed. But, most of the time, he was a pushy, way-too-controlling, borderline jerk. He had trust issues, but he was a contradiction. He was often self-centered and egotistic, yet he was devoted to saving the environment and was completely against infidelity. Often, his ways of “teaching Natalie lessons” were downright cruel, and I wanted her to wake up and smell the coffee.

As for Natalie, I just didn’t really connect with her. She realizes what is missing in her life and current relationship once she meets Michael. After she gets things straightened out and is able to convince Michael to move forward, she basically becomes a doormat and a slave to the feelings Michael can make her feel.

The writing: I enjoyed the style in which this was written. This was my first book by this author, and I was not disappointed with the technical side of things. There were times when things felt like they were dragged out a little too much, but for the most part, the story moves along at a good pace. Aside from my own personal issues stated above, the scenes were very hot and steamy, with lots of sexual tension. Perhaps Michael and Natalie will improve as their relationship grows. This is most likely a case of “it’s me, not you,” so I’ll recommend this to those who like their m/f a little bit darker and edgier with some major sexual tension and mild BDSM.