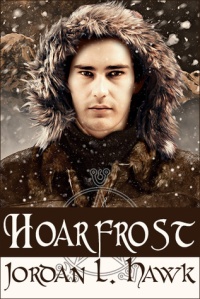 Blurb: Sorcerer Percival Endicott Whyborne and his husband Griffin Flaherty have enjoyed an unprecedented stretch of peace and quiet. Unfortunately, the calm is shattered by the arrival of a package from Griffin’s brother Jack, who has uncovered a strange artifact while digging for gold in Alaska. The discovery of a previously unknown civilization could revive the career of their friend Dr. Christine Putnam—or it might kill them all, if the hints of dark sorcery surrounding the find are true.

With Christine and her fiancé Iskander, Whyborne and Griffin must journey to the farthest reaches of the arctic to stop an ancient evil from claiming the life of Griffin’s brother. But in the rough mining camp of Hoarfrost, secrets fly as thickly as the snow, and Whyborne isn’t the only sorcerer drawn by the rumors of magic. Amidst a wilderness of ice and stone, Griffin must either face his greatest fear—or lose everyone he loves.

“He was heat and passion and magic-scarred skin, my lover, my husband, and the world narrowed to only the two of us here in this bed.” ~ Griffin

I’ve been a naughty reviewer!!  I read an advanced copy of Hoarfrost MONTHS ago and failed to immediately write my review.  Time passed and I completely forgot about what I originally wanted to say about the book.  And since I’ve also been following along with the series on audio, I decided to listen and share my thoughts in one go.

The first three words broke my heart!!  I can’t quote them here because that would be a spoiler, but guess whose POV it is from!  Yes, it’s Griffin’s!  Okay, I will admit that I was initially worried that I would get confused with alternating POVs between Whyborne and Griffin since all the previous novels are written from Whyborne’s POV alone, but of course this author is a genius and the story flowed seamlessly.  Then, months later when I started listening to the audiobook, I was again concerned that I would be confused with the POVs.  I’m very familiar with this narrator reading Whyborne and Griffin’s words and had absolutely no confusion at all!  Whyborne and Griffin have such distinct voices, both on the page and with the narration.  I recommend this entire series on audio because the narrator truly brings these characters to life.  Even Christine!

Back to the story.  Remember at the end of Bloodline, Griffin had finally located one of his missing brothers, Jack?  Now, it’s almost a year later and Jack has contacted Griffin asking for his and Christine’s help with an unusual artifact found in the Yukon.  And of course Whyborne is not going to let Griffin travel away for many months without him, especially if sorcery is possibly involved.  And here poor Whyborne thought the desert was harsh living…  Once the group finally makes it to Hoarfrost, it’s obvious something strange is going on…and time is running out before a horrible, magical creature might be unleashed out in the world.

What can I say about this book that I haven’t already said about any of the previous books?

Whyborne and Griffin is one of my favorite couples and this series has not lost any steam (pun intended).  They are adorable and their love for each other in incomparable and keeps growing stronger and stronger as the series continues.  Oh they both have their insecurities and doubts about themselves, but they never EVER doubt each other.

Of course Christine tags along, but now she has her new fiancé Iskander to join them.  I loved getting to see another vulnerable side to Christine.  I know we got to see a little of that in Necropolis, plus Kander was there, but this time it’s different because she fears her loss of independence by becoming a wife.  I do hope to see the wedding and would love a little “something” from Christine’s POV.  *sigh* A girl can dream.  I bet her and Kander are HOT together!

We finally get to meet Jack!  Poor Griffin has had so many horrific experiences and rejections from his adoptive family.  This time Griffin is determined to not let that happen with his brother Jack.  How do you think Jack and Whyborne will get along?

The bad guy was a little too obvious but the mysterious creature(s) were not!!  And somehow I was able to clearly imagine these strange “things” in my mind.  Still, there was some shocking twists.

I was completely surprised with the direction this story took near the end and I can’t wait for the next Whyborne and Griffin adventure.  Please, there must be more!!

Overall Impression: I Was Amazing!

*I received a copy of the ebook book from the author in return for a fair and honest review.*

*I purchased my own copy of the audiobook*