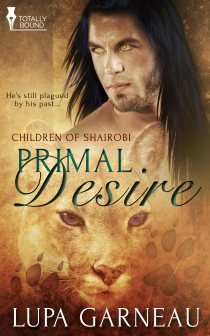 Blurb: Cole never thought he’d find himself in those he was running from… Until he met Nexhan, clan leader of a legendary shifter race.

After a century of vengeance, Nexhan, clan leader of the Rune Fang, returns home to find his people teetering on the edge of extinction. Still plagued by his past and his sense of failure, he has closed himself off from even his closest friend. He is desperate to return to the shifter way of life, but doesn’t know how to cope with the death of his family and his lover.

Cole is the typical outcast—clumsy, quiet and angry. After years of disappointing his parents with his inability to master his cougar’s predatory skills, he runs from the pressure to mate a female who he’s unable to love, but he never expected to end up living among the saber-toothed cats. Heck, he didn’t even know they still existed. Embarrassed by his lack of skills, he retreats into himself, quietly nursing his pain.

A chance meeting in the forest leads Cole to accept Nexhan’s help and companionship, but he never imagined he’d be trusting the male with his deepest secrets. Nexhan vows it’s just sex, but the cougar intrigues him like nothing and no one before. Can he move on and finally lay to rest his troubled past?

After years of being away from his clan, Nexhan finally returns to his home fearing he’ll be rejected by those he left behind only to be accepted with open arms. There he meets Cole, a visiting cougar shifter who stirs feelings inside him he never thought he’d feel again. But Nexhan has a troubled past that he can’t move on from and when danger hits too close to home, will Nexhan and Cole be able to salvage the little relationship they have?

One thing about this story I adored is Cole. I absolutely loved him as a character. To some shifters, he might be a disappointment because he can’t hunt and he pretty much can’t do anything at all that other male shifters can. I loved seeing him grow as a character, to gain confidence and realize that he has abilities he can contribute, he just hadn’t found them yet. Nexhan was a little harder to like. I found his internal conflict interesting but I didn’t like how he acted to Cole at times. I felt like he was intentionally being an asshole and whenever that happens, I expect a lot of groveling to make up for it. However, I did like that he came from such a loving clan and had such a protective and strong personality.

This was a really intriguing story but I did have a few issues. For one, there was too much sex for me to the point that I ended up skimming it towards the end. Aside from that, I felt like the ending was very rushed and I really wanted to know what happened next to Cherchi!

All in all, this was a really interesting story. I loved the world, although I did feel like it was sort of similar to the Black Dagger Brotherhood at times. Still, I enjoyed Cole & Nexhan as characters and loved seeing their story unravel and experiencing everything unfold. I’m really looking forward to the next book in the series and since it’s about Cherchi, I can’t wait to read it!!