Book Review: A Life Without by Katya Harris 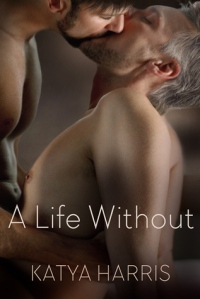 Blurb:  After decades of wondering and worrying over his submissive tendencies, fortysomething Todd decides to explore his fantasies. His first step is to join a BDSM club, and it’s there that he meets Malik, a young and beautiful Dominant who is very interested in introducing Todd to this world. In fact, Malik is interested in everything about Todd, which is startling to the older man given the differences in their ages. Malik helps Todd explore his submissiveness, but after an unpleasant meeting with Todd’s ex-boyfriend, he also encourages him to confront his demons so he will no longer live his life in shame

I’m not big on short stories, mainly because I find it difficult to really connect with the characters in that short amount of time when much of it is devoted to getting the story told in such few pages. But, this one was quite enjoyable, I think mostly due to the somewhat unique aspects. For one, Todd is the older sub with Malik being the younger, but more experienced, dom.

After a rather nasty breakup/relationship, Todd is taking a chance at exploring his kinkier side. That past relationship caused a bit of self esteem damage which really doesn’t help Todd’s situation. Luckily, he is matched up rather quickly with the confident Malik who is exactly what Todd needs. Malik means what he says and says what he means, all of which is positive and caring, a far cry from what Todd is used to.

The reintroduction of the ex seemed a bit unnecessary, and I really would have liked to have seen more of Malik and Todd’s growing relationship instead. What we did get was wonderful though. These guys are really great together once Todd gets past his issues over Malik’s interest in him.

Overall, this was an enjoyable afternoon read. There isn’t anything too heavy, which played out nicely with the short story theme. I’m definitely interested in reading more from Ms. Harris in the future.