Book Review: Without a Net by Lyn Gala

Posted on September 4, 2015 by justjenbo 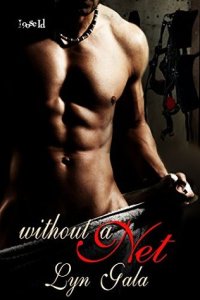 The case quickly gets out of hand, and Ollie finds himself caught between wanting to do his job and not knowing who to trust. That confusion grows worse when a number of sexy and dominant men challenge his assumption that he prefers safe, contractually negotiated sex. It turns out he has more of a wild side than he expected, and given that he’s surrounded by dangerous men, and he can’t distinguish the good guys from the bad, that’s terrifying.

When Ollie gives his trust to Travis Goode, a dominant who appears to be a federal agent, he might be making the connection of a lifetime or dooming himself forever.

Review: This was recommended to me by a friend who knows how much I love the dark, edgy reads. I was not disappointed.

So, this is a story that takes place a few decades in the future where shade clubs are basically BDSM clubs on crack. There are no safe words, pretty much anything goes, and it’s often quite brutal. Up to this point, Ollie has been sticking to the regular clubs, but feels he can handle the shade clubs for the sake of the job. Things quickly appear to get out of hand for Ollie, but he sticks it out. Unfortunately, things get dark pretty fast for Ollie when things take a darker turn upon his return. He is kidnapped and forced to be “trained” to sub. Throughout this training, Ollie struggles to keep sane, to keep things clear about why he is doing things, all the while realizing it could be Stockholm Syndrome.

Now, Travis is the husband of Ollie’s neighbor. When he shows up at the bad guy’s compound, we aren’t really sure whose side he is on. Is he good or bad, a shade dom or not? He plays an important role in seeing the assignment through by playing the part of Ollie’s dom/owner. There is more to Travis, but I don’t want to give too much away.

The main issue these guys have is the mental aspect of their respective roles as men, dom/sub, etc. Travis is not convinced Ollie has done things of his own accord, also afraid that Stockholm Syndrome has played a part, he feels guilty over the part he had to play and so he backs off.

Ollie now finds he needs more than the control clubs can provide, but he is only able to further with someone he trusts. He is unable to return to his previous job due to trust issues, and it takes a while for these two to get on the same page once the job has ended. But, through the help of friends (some really interesting side characters, btw), they make it happen.

This is a heck of a rollercoaster ride. Up, down, this way and that. You never know who is on what side, who is undercover, who will survive the reconditioning, etc. It is fast-paced and kept me on the edge of my seat. Definitely a winner for me, and I highly recommend it for those who like things a bit darker and edgier.

2 thoughts on “Book Review: Without a Net by Lyn Gala”