Book Review: Captured at the Castle by Alexandra Ainsworth 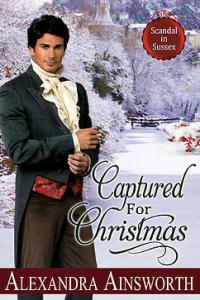 Blurb: Geoffrey Hammerstead always dreamed of protecting others. Geoffrey is delighted when he moves to Ashbury Castle to take on the duties of magistrate. But when his uncle, Sir Ambrose, goes missing and is accused of running a long smuggling network, Geoffrey finds himself under suspicion.

Former thief Etienne Rivaud is furious after being wrongfully thrown into prison. But Etienne is more furious when the new magistrate is assigned to protect him.

Geoffrey and Etienne are both confident they abhor each other, but somehow they cannot stop thinking about each other. Can they ever attempt to forge a future together in a world where sodomy is illegal, and Geoffrey’s job requires him to enforce that?

Okay.  I’ve put this review off long enough.  I finished Captured at the Castle about a month ago and every day since I’ve been meaning to type up my review.  But, honestly, I don’t really have many nice things to say about it…and I hate not being nice.  So here goes…

The story begins just before the end of The Duke in Denial.  As I expected, the heroes are Geoffrey Hammerstead (the magistrate and nephew of the villain from The Duke in Denial) and Etienne Rivaud (the friend of the real duke).  In the beginning, I was a bit confused because I couldn’t remember all the characters and their names from the first book, so I had to do some name searches to refresh my memory.

I enjoyed some things, but then I was annoyed by more things.

I was annoyed with many of the scene transitions.  For example:  everything was coasting along, interesting things were happening, and then all of the sudden there’s a scene cut to a new day and place.  And all I wanted was to be shown what actually happened and not told about it later!!  Okay, that actually brings up another annoyance of being “told” and not “shown”, but I will leave that one alone.

I enjoyed the cameos of the characters from The Duke in Denial.  It was fun trying to remember them from many months ago.

I was annoyed with Geoffrey and Etienne’s repeated “rushing” or running away.  For example, things would start heating up and then one character would change his mind and “rush” off into the woods.  End scene.

I was annoyed that the pace kept getting bogged down with flashbacks of Etienne and Geoffrey’s past.  I’m all for flashbacks when they are used appropriately, but I think these scenes could have had a better impact if they would have been the characters telling or sharing the event with each other, rather than just telling the reader.  Plus, I was getting bored with all of Geoffrey and Etienne’s fantasies and desires…was too repetitive and didn’t work for increasing the sexual tension.

I enjoyed the time period.  It’s 1804, Georgian…but close enough to almost be Regency.

I was further annoyed with the hot-and-cold nature of Geoffrey’s character.  I mean, I’m all for a conflicted hero who doesn’t want to give into his desires, but Geoffrey was swinging so quickly from one end of the spectrum to the other, that I didn’t find him believable at all.  In fact, a few times I was actually hoping that Etienne would give up on him altogether.

I enjoyed the idea of the story.  Enemies to lovers.  Law enforcer and thief.

I was annoyed that I felt no romantic connection between Geoffrey and Etienne at all…and for a romance, that’s what really matters for me in the end.

I probably won’t continue on with this series.

Overall Impression: It Was Okay