Book Review: Kick at the Darkness by Keira Andrews 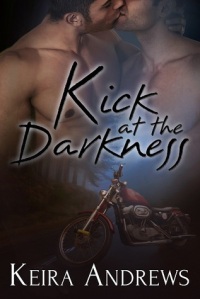 Blurb: To live through the zombie apocalypse they have to survive each other first.

College freshman Parker Osborne is having the worst day ever. He humiliated himself trying to pick up a cute guy, he hasn’t made any friends at school, and his stupidly hot jerk of a TA gave him a crappy grade on his paper. He’s going to drop Adam Hawkins’ film class and start fresh tomorrow after he’s had a good sulk.

But Parker’s about to find out what a bad day really looks like—if he can survive the night.

A virus is unleashed, transforming infected people into zombie-like killers. After these quick and deadly creepers swarm campus, Parker only escapes thanks to Adam swooping him onto the back of his trusty motorcycle. Now they’re on the run—and stuck with each other.

When they’re not bickering, they’re fighting off the infected in a bloody battle for survival. Their only hope is to head east to Parker’s family, but orphaned Adam has a secret he’s not sure Parker will accept: he’s a werewolf. Can they trust each other enough to find some light in these dark days?

Review: This was EXACTLY what I was looking for when I went looking for a zombie book…plus some. It’s very hard to put a new spin on the zombie apocalypse theme, but Kick at the Darkness took a tried and true story and twisted it into something different and exciting. I was drawn into the story instantly and hated to put it down. It is everything you’d expect from a zombie/MM story and the relationship between the protagonists was believable with entertaining dialogue. Dialogue is very important to me as a reader; I much prefer to live the experience as opposed to reading about it and this story delivered.

Our protagonists are both college students; Parker is a spoiled, entitled brat from a wealthy east coast family, and Adam is a TA who worked for everything he had and was without a family of his own. You want to hate Parker at first, but he has his reasons for being a pain in the ass, plus he was extremely funny and had no filter with anything he said. Adam is big, super fast, extremely strong, and has a secret that’s exposed midway through the book, and even though he and Parker start off on the wrong footing, they are forced to stick together when the world turns upside down. There is no insta-love and these two would probably have never even see each other again if the zombies didn’t force the issue.

These infected zombies are scary creatures, and the chattering gave me chills…I believe I would have nightmares forever if this was ever turned into an audio book with sound effects. Watching Parker and Adam travel from one coast to the other, meeting up with other survivors, fighting their way through the hordes, and falling in love along the way was totally engrossing and kept my rapt attention. I loved the ending and a part of me was happy it ended the way it did, but another part of me wants a sequel to see how things ended up with the infection and where the guys eventually end up. But then again, maybe it’s best to let them live inside my imagination and sail off into the sunset.