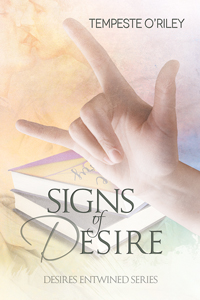 Blurb: Simon Tyler knows his job as a gay romance author makes his lack of faith in love more than a little ironic, but he’s tired of being used for his wallet. When a night out turns into a matchmaking scheme orchestrated by his best friends, Simon’s not thrilled, but since he’s not the target and he’s sworn off happily-ever-after anyway, he goes along with it… until he meets Adrian, the object of their efforts, and finds perhaps he hasn’t given up on love after all.

Professor Adrian Keys has tried to date Hearing men before, but being Deaf himself, he’s never had any success at making a connection. After his friends con him into going out and Adrian realizes it’s all an elaborate plan to set him up, he braces for yet another failure, only to discover there is a spark—except it’s not with the man his friends had in mind, but with Simon Tyler instead.

Not all their friends have found a way past their romantic failures, but Simon and Adrian might be on the path to happily-ever-after.

When Chase convinces Adrian to come out for drinks, he doesn’t expect Chase to play matchmaker. And when he meets Simon, there’s an instant attraction but Adrian’s tried dating Hearing men before and hasn’t had much luck. Plus, Simon has his own issues and not looking to be in another relationship. Even with their own problems, the two can’t help but want to spend time together but someone’s determined to break them up. Will they be able to get passed the hurdles that seem to be inevitable when it comes to their relationship or will their insecurities and doubts be the downfall for them?

I really enjoyed this one. I absolutely loved Adrian as a character because he was confident and very comfortable in his own skin, which meant him being Deaf didn’t make him vulnerable. At the same time, I liked that Simon was willing to learn sign language for Adrian because it showed how serious he was for Adrian from the start. Add to that, I liked that Adrian wasn’t after Simon’s money and he proved that to Simon over and over. Together, they were such a cute couple and I just loved reading about them!

This was probably my favorite of the series so far but there was too much sex for my tastes. Aside from that, there wasn’t much of a conflict, IMO, so I felt like the story was a little too ‘easy’. With the way the other stories were, I expected something more…. intense towards the end. But I felt like the conflict was still unsolved a little (such as who took the picture of Simon).

Even so, I really enjoyed this one. I loved that Adrian being deaf didn’t make him a victim and that Simon was so willing to learn sign language for Adrian. They were adorable together and it was great seeing everyone else again. Definitely looking forward to the next book in this series!!!

One thought on “Book Review: Signs of Desire by Tempeste O’Riley”