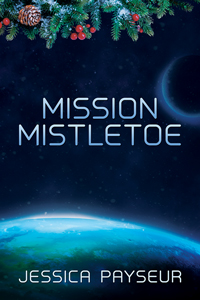 Blurb: Captain Archer Pfeil’s current assignment has been nothing but one long string of disasters. As if being dumped right before Christmas wasn’t enough, the mounting misfortunes indicate he’ll be out of a job by the end of his mission.

But it’s difficult to salvage the assignment with Ambassador Ilin a’dlen Jhex around, pushing all Archer’s buttons. He struggles to keep his distance from the out-of-bounds ambassador, but Jhex has other plans in mind….

After a string of bad situations, Archer knows the outcome of his assignment won’t be good. Especially when his job is dependent on what Ambassador Jhex decides. And if it’s not bad enough he’s catering to the whims of Jhex, he can’t help but feel an attraction towards the man. Thankfully, Jhex feels the same attraction and he won’t stop until he has Archer’s complete attention even if it means participating in a holiday he has no idea what it’s about.

I’m not sure how I feel about this story. On some level, I liked that it was a Christmas story in space. On the other hand, this was more about lust than love… which isn’t really my forte. I enjoyed the push/pull between Jhex and Archer and I liked that Jhex was trying to do something sweet for Archer but I didn’t really like Archer as a character. He was so rude to Jhex and for no reason at all. It was a strange thing especially when he does a complete 180 at the end and gives in to Jhex.

All in all, not a bad story. It had a lot of potential but the story was way too short for the amount of world behind it. I hope the author considers republishing this story after expanding on it because I would have liked to see them before AND after this story takes place.