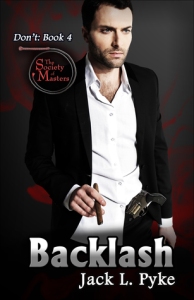 Blurb:  In the aftermath of Jack Harrison’s release from the psychiatric unit, Gray Raoul’s first instinct is to take brutal revenge on the one responsible for financing Jack’s and Jan’s torturous psychological reconditioning. However, that person is a plays the game dangerously well, knows exactly how to manipulate everyone in Gray’s life. To help negotiate this delicate situation, Gray contacts Trace and his ex-Diadem Dom, Gabriel Hunter. But the more Gray seems to regain control, the clearer it becomes that there’s something not quite right about Jan Richards. Jan quickly unravels, taking Jack and Gray with him, and bringing out one particularly deadly player, Gray’s left with one last defence: break Jack down in order to partner up with his alter ego, Martin. But once freed, Martin has plans of his own, and he wants to make it personal with Gray. Complete trust between Master and sub, between Gray and Jack, will be tested to the absolute limit.

Review: You absolutely have to read this series from the beginning. If you’ve made it this far, you’ve been yearning for this installment for as long as the rest of us Don’t addicts. This is Master Gray’s book, or told from his POV. These guys have been through hell and back more than once, and time hasn’t quite healed any of them yet. They continue to struggle with everything that has happened and shaped their current relationship. I have no idea how to put into words how much I love this series. Just as the Master Subs and other characters’ minds are manipulated (in both good and evil ways), so too was mine. That is one of the things I love most about this series. It is so in-depth and complicated, yet easy (mostly) to follow. It made me catch my breath over and over, and for a book to grab my emotions in such a way makes it a clear winner in my book.

Just as with the previous installments, we see the guys trying to cope, each in their own way, while trying to help the others. While they all play extremely important roles in this relationship, Gray has always remained the center of this triad for me. He is the Master after all. I don’t believe I have ever come across such complex characters in all my reading. We learn more than we ever have about Gray’s past and what makes him tick, but I truly don’t believe we will ever fully understand every layer of him. Over the course of these stories, Gray’s motives may have seemed somewhat questionable, but I never once doubted his level of care and devotion to Jack, and even Jan for that matter.

Jack is a close second in my favorite character lineup. He is complex in such different ways than Gray, and I love every one of them. Dare I say, I even love Martin. He is my favorite “evil” character hands down. It seems as though the guys have found a way to sort of contain Martin, but it remains a fine line. When it is Martin who has the information needed, they must all go back on everything they’ve done up to this point in keeping him out of the picture and bring him front and center. It is through Martin that we learn even more about Gray, and I love how Gray handles the two, Jack/Martin. Gray really is a remarkable individual, and I fell even more in love with him in this segment.

Jan is my least favorite, but I concede he is a much needed partner in this group. He is the one who filled the gaps left by Gray which is exactly what Jack needed. He is the soft to Gray’s hard. I honestly kept waiting for the time when he would just give up on Jack and Gray and walk away. He isn’t of their world, and it shows more than once, but he is stronger than he appears, especially after all he’s been through. I definitely garnered new respect for Jan for not giving up.

I am not usually one for nicknames or overused terms of endearment in my stories. Never before have I actually longed for them as I do with this story. Every time Gray call Jack “stunner,” I got a little choked up. The same went for Jack calling Gray “mukkah” or “old mukkah.” Heck, even Martin calling Gray “Welsh” got to me and brought so many feelings back. Ms. Pyke writes with such intensity that I find myself overwhelmed by it at times, in a good way. I held my breath so many times, and just when I would catch it, it would happen all over again.

I was so excited to learn there is another book coming in this series after thinking this was the last one. These poor guys need a break, but I’m really glad they’ll be back. I tried to read slowly and savor it, really I did, but it was so hard to do.

I have to give a mention about the additional characters here. Poor straight Craig truly needs a raise, because whatever the MC is paying him, it cannot possibly be enough to justify all that he does for these guys. He is always there providing whatever care is needed, no matter what that entails, and it usually entails quite a lot. He was one of my favorite characters from Jack’s time at the ward, and he remains so now. It was also great to see Lynn Kelling’s characters from the Society of Masters joining the guys when they were needed. I immediately went on to read their stories after this to learn more about them and their connection to the MC and the trio as well. I definitely recommend you check them out.

So, this book (and the entire series) continues to hold the spot at the tippy top of my all-time favorite list. If you love things on the darker side, love watching your characters go through hell and fight their way back, love highly emotional and gut-wrenching stories, you should move this series right to the top of your list. If I could give it more than 5 stars, I would not hesitate to do so.