Book Review: Getting Him Back by K.A. Mitchell 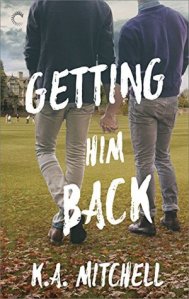 Ethan may have followed his high school sweetheart to college only to get dumped his first day there, but he’s not going to let that stop him from exploring all his new life has to offer. Sex-only hookups, his photography, new friends and a campus-wide game of zombies vs humans all help keep his mind off his broken heart and move him toward building a new, better life without his ex.

And then there’s Wyatt. Mysterious, grouchy—hot. And possibly not gay. But Ethan’s not going to let that stand in the way of figuring out what makes Wyatt tick. New college goal? Get Wyatt into bed and into Ethan’s life.

Step one: arrange a “tutoring” date. Step two: “accidentally” bump into Wyatt as often as possible. Step three: explore the sexy body under that ever-present hoodie. And when their friendship deepens into something neither of them expect, convince Wyatt he’s not just a pity fling or a one-time hookup, but that Ethan is in it for the long haul.

Review: When I saw this story was new adult, I was slightly cringing on the inside, but it was K.A. Mitchell, so I had to give it a try. An auto-buy author forces me to put my personal dislikes on the back burner and give things a go that I would normally avoid. This is a case where it worked out for me, and I couldn’t believe I almost passed it up. I think, for me, the preference to read about men instead of boys or college-aged men stems from my being over 40. It’s very hard sometime to separate the ick factor, but for some reason, I liked this one. It was like the old K.A. Mitchell was back, and I really loved her old stuff.

Ethan made the rookie mistake of following his high school sweetheart to college. Not sure how often that works out, but in this case, his surprise of finding out Blake “doesn’t feel that way anymore” is enough to send Ethan off the deep end. The confusion he feels when he finds himself attracted to Wyatt, Blake’s roommate, only makes him further stressed out. Not enough to push Wyatt away though, because come on, he is a guy and has needs. But still, he pines a bit for Blake and uses Wyatt in that endeavor.

Wyatt has a genetic disorder that I’d never heard of before. I ended up stopping my reading to look it up and was amazed that I knew nothing about it. The white streak in his hair and the wide set multi colored eyes did nothing to detract from his looks apparently, because Ethan was all over him. I kind of liked that Ethan got past Blake as quickly as he did. I was dreading it being drawn out, but it didn’t happen, and I loved that Blake tried to come back. Wish that happened more in real life.

So yeah, I was proven wrong and am glad I gave this one a try. For those who are K.A. Mitchell fans, I guarantee you will find this one as entertaining and enjoyable as I did. The only thing that would have made it better would have been if they were a little bit older. Besides that, kudos to one of my favorite authors for pulling me out of my comfort zone and not making me regret it.