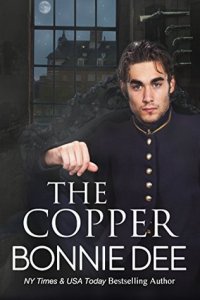 Lord Avery Wickersham wakes from a night’s debauchery at a bordello to police officers pounding on the bedroom door. During the vice raid, Constable Connor Tate is ready to arrest the lord and his two male sex partners when Avery’s glib tongue earns a reprieve for his friends if not for himself.

From this grim beginning, men as opposite as summer and winter slowly work their way to an unexpected spring. Avery is ripe for a change in his aimless life, while Connor struggles between duty and desire. Overwhelming passion takes them by storm, but can a rush of lust evolve into love when their lives are so different?

While Avery attempts altruism by volunteering at a charity mission, Connor uncovers government corruption and an evil man who brings torture and death to his victims. The duo join forces to try to stop the killer, but when one of the lovers faces peril, their time may run out.

Warning: Contains a scene of abuse and torture.

During a midnight raid on Madame Renault’s Club, Constable Connor Tate comes face to face with Lord Avery Wickersham and his two “un”lucky bed partners.  For the past two years, since Avery swore an oath to abide by the law, he has crushed his desires for other men.  Now, being forced to arrest men who aren’t hurting anyone in the privacy of a bedroom, Avery is torn between his belief in the law and his belief in right and wrong.

Smooth talking Lord Avery Wickersham is able to convince Connor to spare his two friends and only arrest himself, but not before Avery recognizes desire in the constable’s eyes.  Once he is free, Avery is determined to seduce Connor.  And when Connor discovers that a dirty politician and a corrupt cop are torturing and killing young men of a certain “persuasion”, it only brings Connor and Avery closer together…but it might also be what tears them apart.

I really enjoyed this story.  It’s always fun to read romances where the characters’ backgrounds are completely opposite, and to have a chance to see them find a way to get past their differences.

I especially enjoyed Avery’s seduction of Connor.  He certainly was determined and it didn’t take Connor long to give in.  The sexual dynamic between them was delicious and the little bit of bondage was handled sweetly.

This story was a bit darker than what I’m used to reading by this author (graphic mentions of torture and rape) so I was surprised when some scenes went as far as they did.  Although, I have no issues with the content, it may be triggers for others.

The suspenseful pieces of the plot made me want to scream!!!  The author does a good job portraying the injustices of the time for those men who desire other men.  Crimes could be committed on them and there was nothing they could do to legally get justice.  I wasn’t hopeful for a believable solution, but somehow the author was able to pull it off.

Nice, believable HFN ending and I could absolutely enjoy a sequel of Avery and Connors story…or even a HEA for Bertram.