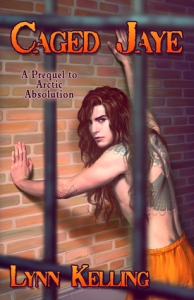 Blurb:  It’s Jaye Larson’s nineteenth birthday, and all he wants is to spend time with his boyfriend and his mother—the people he loves most and who make life worth living. But, faced by his mother’s demons, the imperfections of his relationship with boyfriend, Kris, and dangerous, homophobic strangers, one by one, all of Jaye’s dreams are soon derailed. Plunging into a waking nightmare, shortly after going to bed alone, he wakes in an alley, pinned down by two men with slow, bloody rape and murder in mind. It’s just the start of Jaye’s fight for his life, and his sanity, as time and time again, he’s forced to make impossible choices and survive, no matter what it costs.

Review: This is the prequel to Arctic Absolution. If you haven’t read that yet, after you’ve read and accepted the warnings, I highly recommend you do. I fell in love with Jaye in that book, and even though you get a pretty good understanding of his past and the things that happened to make him the way he was in that story, it really doesn’t compare to reading it first hand, which is what we get here.

Caged Jaye takes us back to his teenage years with his first boyfriend, which unfortunately didn’t allow Jaye to experience much good before things took a turn for the worse. When Jaye ends up killing the men who set out to gay bash and rape him, he is sent to prison for murder. Being on the prettier side of the spectrum, he knows he is going to have to take some drastic measures in order to survive his prison term, and he wastes no time setting those things in motion. He manages to place himself in front Cash, of the biggest badass leader in the joint, offering himself in exchange for protection.

Now, don’t get me wrong, none of this was easy for Jaye, but he was pretty desperate, terrified and doing the only thing he could think of to ensure his survival. Ms. Kelling beautifully shows the emotions and turmoil Jaye faces each and every day he is incarcerated. Jaye has it extremely rough – not only with Cash, but with the other inmates and even some of the guards themselves. There was very little positivity in Jaye’s life during this time with nobody to really trust on any level. Cash is a pretty strong deterrent, but there were times when he was in solitary or when Cash’s own deals had to be paid for, that placed Jaye in even more danger.

Through it all, we get to see how Jaye fought and survived. It gave a whole other level of understanding as to the Jaye we know in Arctic Absolution. I loved seeing that understanding into what made Jaye so fierce and protective and how that shaped his relationship with Dixon. While Jaye does end up having some feelings for Cash, there isn’t really anything that can come of it and it definitely seemed more of a relationship based on circumstance with a tinge of Stockholm Syndrome thrown in. The real “romance” or relationship for Jaye happens with Dixon in Arctic Absolution, so be sure to read that for the happier part of Jaye’s life.

This was an amazing story that had me on the edge of my seat and turning page after page to see how Jaye made it out. I think it helped knowing he survived and ended up finding happiness with someone after so much had been taken away from him and from such an early age. I almost wish I had read this story first, but that doesn’t change how fantastic and well written it was and how it made me want to jump right in and reread Artic Absolution all over again to see it in a new light. Another definite winner from Ms. Kelling for me, and I look forward to the next.