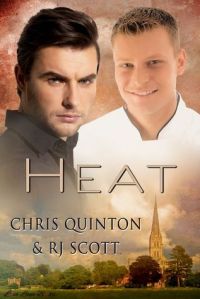 Blurb: Serving up passion, family, love and hate, with a side order of arson.

Lewis has lost nearly everything, and now it seems that Devon is here to take the last thing he has left – working in his beloved restaurant, Laurels. But when an arsonist threatens everything Lewis loves, he realises sometimes everyone has their ghosts, and he discovers an unexpected ally who is prepared to risk everything for him.

Set in the small cathedral city of Salisbury, Master Chef Lewis Mandineau no longer owns the Laurels, the restaurant that had been in his family for generations. Betrayed and robbed by an ex-lover, he’s had to sell to Trelawney Enterprises, an American corporation. That isn’t all Lewis has to contend with. Rachel, his beloved younger sister has been left severely hurt by the car crash that killed their parents, and taking care of her has to be his priority.

Enter Devon Trelawney III, sent to assess the viability of the restaurant and its staff. Devon knows all about family tradition. But he also knows sentiment has no place in business matters, and the Laurels’ potential is swamped by the debts it has accrued. Devon is a hardheaded businessman, first and foremost, but Lewis and Rachel test his resolve in different ways. Soon Devon is forced to admit that what seems like an impossible love can sometimes become something very real.

Review: Once gain I find myself reading, reviewing, and loving another RJ Scott book. I am a huge fan of this lady and know that I will never be disappointed. So why did it take me so long to read this book? Because for some reason I didn’t even realize it was out there until I saw the marketing materials for book two, Ice. Some fan, huh? I think I might end up losing my RJ Scott fan club membership over that unforgivable faux pas. But, we are here to talk about the book, so let’s talk about “Heat”.

Lewis is a surprisingly upbeat guy for someone what has basically had everything thrown at him, except the kitchen sink. He lost his parents, his boyfriend, takes care of his disabled sister, and nearly lost his family business. This is a man who is much loved and respected by his employees and has put others needs ahead of his own. That philanthropy gained him respect but lost him his home in the process. Being an honorable person doesn’t seem to get him much, especially once Devon shows up in the picture.

Devon is a wealthy man sent by his father to look over their newest acquisition…Lewis’s family restaurant, The Laurels. Devon is a complete horse’s behind. His arrogance, shallowness, and uncaring ways made it almost impossible for me to accept him. It was going to take a complete miracle for these authors to redeem this guy because he was just awful. Lewis and Devon…two of the most unlikely love bugs ever.

It turns out that Devon wasn’t so heartless after all. Yes, it took awhile for me, Lewis, and his staff to warm up to the yank, but once we did it was all good. Now we have to deal with an arsonist. Lewis can’t catch a break, but he did catch a lover…and one that is really pretty spectacular once he turns on the charm. Devon really needed Lewis more than Lewis needed Devon. Money isn’t everything and it can’t buy happiness.

This was a great story and a fine beginning to the Salisbury Tales series. I am looking forward to seeing how these authors follow it up with “Ice”. If this book is any indication then I think it will be pretty fine, as well.