Book Review: Manties in a Twist by J.A. Rock 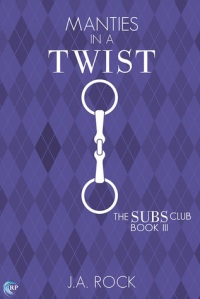 Blurb:  Look, I’ll never stop missing Hal, but this Subs Club my friends started to review suck-ass doms isn’t gonna bring him back or give him justice. For me, it’s just another chance to hang out with my friends, even if they think I’m too dumb to understand the important work we’re supposedly doing.

But maybe I’m not as dumb as they think—at least I know when I’ve got a good thing going. Which is why I just moved in with my dom. Ryan’s awesome possum. He’s really short, never makes me feel stupid, and is up for anything. One word: costumes. Two more words: women’s underwear. We’re all about the lace, no leather.

Except when we do pony play. We first tried it as a joke, but turns out I’m ballin’ at it. Now PetPlayFest is coming up, and I wanna take down the Subs Club’s archrival, Cinnamon the ponygirl, in the horse show.

My friends think I’m spending too much time with Ryan and ignoring my obligations to the group. But since when is friendship an obligation? Ryan’s my first serious relationship, and I want to take it . . . seriously. At some point I need to think about my future, not my past.

Review: I almost didn’t read this one, because I’m really not into pony play all that much. However, I’ve been pleasantly surprised by the previous books, and this one was not different.

Kamen and Ryan are already together when this book starts, though we knew them and saw them get their start in the previous book. As they adjust to living together, they begin to discover things together, i.e. manties and a general sense of wanting to explore more with each other sexually.

This book was hilarious. I cracked up often at Kamen and his Kamenisms. These guys are really cute and a couple of goofballs who like to have fun in whatever situation they find themselves in. From watersports to the manties and other role playing, each scene was full of fun.

The main part of this story, however, was Kamen being challenged by Cinnamon (who was the one who was in the room when Hal died and has been an utter bitch to the group ever since) to attend the next pet play event. Thinking of it as a chance to get back at her and put Cinnamon in her place once and for all, Ryan and Kamen go all in to be the best pony/handler in the show. Could it have been more serious? Sure. But for someone who wasn’t totally into that scene, I found it to be quite enjoyable and entertaining.

There is still a little bit of tension between the guys over Kamen’s relationship with Ryan, mostly concerning Dave.  I liked seeing the guys having issues and then hashing them out.  They aren’t perfect, but they are making progress, and I was happy to see this aspect of the story play out.

Each of these stories has taken an aspect I was not fully interested in and made me really enjoy it. I’m glad I stuck with this series after book 1 and am looking forward to Gould’s story as well.

*I purchased my own copy of this book for my review.*