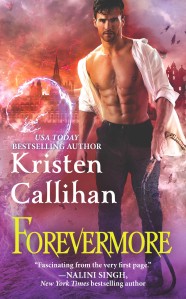 Blurb: Isolated and alone, Sin Evernight is one of the most powerful supernatural creatures in heaven and on earth. As an angel of vengeance, he hunts down the darkest evil, but when his long-lost friend, Layla Starling, needs him, he vows to become her protector. Even though she will be horrified by the man he has become.

Now a famous singer and the toast of London, Layla believes that Sin is only here to guard her from rabid fans and ardent suitors. However, the truth is far more sinister. Desperate to avoid losing Layla a second time, Sin will face a test of all his powers to defeat an unstoppable foe – and win an eternity with the woman he loves.

Forevermore is the seventh and final novel in Kristen Callihan’s Darkest London series.  I discovered this series a few years ago and have thoroughly enjoyed it as it has a little bit of everything I love when reading a paranormal romance series.  It has mystery and steamy romance mixed with almost every sort of supernatural element I can think of:  ghosts, steampunk, angels, demons, shapeshifters, fae, alternate worlds, resurrection, magical powers…I’m sure I’m forgetting a few.

Forevermore finally tells the story of Sin Evernight.  If I remember correctly, he was introduced very early in the series (maybe even as early as book one), but I’m not going to go into details of his past because that would be MAJOR SPOILERS if you aren’t caught up with the series.  I will just say he has A LOT of power and has involved himself with a REALLY BAD creature.

I was super excited when I received a copy of this book for review, but when I started reading, I immediately realized my memory of the previous book was not as good as I thought.  There were SO many things I could not remember, and I was pretty confused for about the first 20% of the book.  I kept thinking to myself: was I already supposed to know this?  Or is this a new revelation?  Ugh, it was discouraging, but I continued on and luckily the author does a good job of recounting important details.  I was just bothered by the fact that with a lot of it I wasn’t sure if it was a new detail, or just a refresher.

Sin’s love interest is his childhood friend Layla Starling.  Did I already know her?  She is a famous singer and ward of Augustus.  Did I already know this?  Ugh, anyway, Augustus has appointed Sin as Layla’s protector and future husband…hopefully.  But Sin has a secret, and Layla has a secret, and Augustus has even more secrets!!  Let’s just say people have some explaining to do!

The Romance:  Well, there are actually TWO romances happening in this book.  Of course there is Sin and Layla, but there is another couple that I will not name.  That would be a spoiler!  Sin and Layla have tons of chemistry on the page and the innocence they both bring makes for good sexual tension.  (Yes, Sin is a little innocent…in some ways.)  I wouldn’t say they are the steamiest couple of the series, but their devotion to each other more than makes up for it.

“Because you, St. John Evernight, are mine.  Whether you will it or not.  Your heart and soul have been mine to keep since I climbed up in that bloody tree to drive you mad.  Mine to protect.  And if you are bloody broken, then I bloody well will be here to help you put the pieces back together.” ~ Layla

The Bad Guy:  He wasn’t very interesting and that whole plot line felt more like filler material, but I guess the big battle at the end was important for the maturation of several characters.  But through most of the book, those parts were boring.

The Mystery:  Most of the mysteries surround the characters themselves and the secrets they held…or the secrets someone kept from them.  Many questions I’ve been asking since the beginning of the series (I think) finally get answered.  And now a lot of things make sense!

The End:  Forevermore does well as a final book of a series.  All the loose ends are finally tied up (I think), and we get to see almost all the previous couples.  I had forgotten how much I loved Jack!  Oh, and I almost forgot to mention that some BIG things happen with Archer and Miranda!!  Like MAJOR!!!

I’m happy with the conclusion of this series, but I’m still sad to see it end.  For this author, I prefer her paranormals over her contemporaries.  So I hope she has plans for something new and different coming up soon.