Book Review: Gays of Our Lives by Kris Ripper 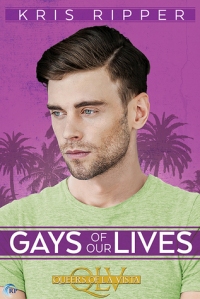 Blurb:  Emerson Robinette only leaves his apartment to get laid and go to work. Having MS—and trying to pretend he doesn’t—makes everything more complicated, especially his fantasies of coming on strong and holding a guy down. Finding a partner who’ll explore that with him isn’t Emerson’s idea of a realistic goal.

Until a chance meeting with a hipster on a bus makes him reconsider. Obie is happy, open-hearted, and warm; what’s more, he gets his kicks being physically dominated, spanked, and teased until he’s begging. It would be perfect, except for one thing: Emerson isn’t made for happiness, and he doesn’t see how a guy like Obie would settle for a cynic like him.

But as far as Obie’s concerned, the only thing keeping them apart is Emerson. Can Emerson handle a boyfriend who’s more invested in his future than he is? Emerson’s barely convinced he has a future. But when Obie’s smiling at him, anything seems possible.

Review: I’m a huge Kris Ripper fan, so despite not loving the cover, and the title not grabbing me right away, I didn’t hesitate to grab it. Kris writes extremely realistic feeling stories where the characters are believable and you could totally picture them existing out in the world somewhere.

Emerson is a guy with MS, a debilitating illness that basically runs his life. He is extremely bitter about his circumstances. He keeps people at arms length (including the reader), not letting anyone close in a sort of self-imposed punishment. He is pretty miserable about his condition, which he knows will only get worse, and he doesn’t believe there is anyone out there who would want to be with him anyway, especially given his dominating fantasies.

But then he meets Obie. Obie is wonderful and such a doll! He never looks at Emerson’s disability as anything more than something that they need to work around or find other ways to make things work. He is humble and sweet and just an all-around great guy. I loved how positive he always was and how he never took any of Emerson’s crap. He was exactly what Emerson needed, and they made a great couple.

This story is told by Emerson, and one of the things I really enjoyed was how it came across as though he was telling his story to us. There was funny dialog, and he would make comments to the reader that made me chuckle. Even though he was a bit cranky in the beginning, I loved how real he felt and couldn’t help but feel for him as he dealt and came to grips with his illness. I was sure glad he came around to Obie as well, because he definitely deserved a happy ending for being the superstar he was.

Obie’s roomie and bff, Mildren (Dred) was a great character as well. I love how this somewhat ragtag group ended up their own little family with each getting the support they needed from each other, and I hope we get to see them again in the next installment.