Book Review: The Vampire and the P.I. by J.P. Bowie 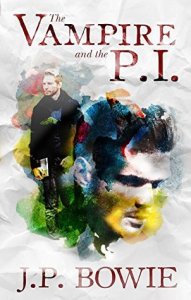 Blurb:  When Sean Martin was shot in the hip he thought his days in law enforcement were over. Leaving the force with commendations and a healthy disability agreement he opened up his own private investigative business, and for a while enjoyed success until a jealous and homophobic ex-colleague spread a story about Sean assaulting an underage boy, the son of an influential congressman.

Overnight, Sean’s business tanked, leaving him broke and with zero clients. That is until Master Vampire, Rafael Barrantes, hires him to find the murderer of Julian Hunter, a young male escort. Sean isn’t crazy about working for a vampire—but all that changes when he meets Arturo Menendez, Rafael’s private secretary.

The stunning and uninhibited Arturo wastes no time in showing his admiration for the handsome PI. He immediately tries, and succeeds in seducing Sean. In between bouts of the most amazing sex Sean has ever had, he discovers that the facts surrounding Julian’s murder have been swept under the carpet. Perhaps by pressure from his wealthy ‘clients’ whose veneer of respectability might be irreparably damaged if it were disclosed they had used Julian’s services.

With Arturo’s help, Sean wades through a web of deceit, lies and treachery trying not only to find Julian’s killer, but also to vindicate himself of the false rape charge that ruined his career. In the process he is beaten, kidnapped by a bad cop, and bitten by a rogue vampire. With the odds stacked against him, can he possibly ever solve the mystery of Julian’s murder, and can Arturo, even with his vampire powers, save Sean from a grisly death?

Review: What a fun story this was! I picked it up when I saw the sequel, The Vampire and the G.I., was coming out, and boy was I glad I had them both ready to go. If you were a fan of the older paranormal stories, such as the Argeneau series from Lyndsay Sands, or the Night Huntress series by Jeaniene Frost, you will surely enjoy this one. It had that feel to it, with the added bonus of m/m and some really hot sex scenes.

It is the story of Sean, now a private investigator after he was set up and forced out of his job as a police detective. Sean is a super nice guy, even after all he’s been through and is just trying to get his life back on track when Master Vampire Rafael hires him to solve a murder mystery.

It is about 20 or so years in the future and vampires have been outed to the public and are struggling for rights much in the same way gay people are today. Sean hasn’t had much contact with them up to this point, but when he meets Rafael’s secretary, Arturo, he gets a quick lesson in the benefits of having a vampire lover. The vampires are all gorgeous, sophisticated, sexy, powerful, yet humble. They generally don’t flaunt any of it. They don’t really have to and it made them quite interesting.

While there is some seriousness surrounding the story, the characters all have a very comfortable feel to them and were a joy to read about. There is little angst involved, even as Sean adjusts to life with a Vampire. Arturo is super sweet and I really loved watching him and Sean fall for each other. Their chemistry is off the charts and things even get a little kinky now and then. There is a good mix of case solving to go with the relationship and smexy times.

This story was very well written and was so much fun to read that I finished it in a day and couldn’t wait to jump right into the next one, which was just as good as this, btw. I highly recommend them both. This was my first story by this author, and I will definitely be looking for more in the future. I’m really hoping there will be another one in this world.

3 thoughts on “Book Review: The Vampire and the P.I. by J.P. Bowie”